WINGS-WATCH: Having already publicly abandoned his support for Scottish independence, Stuart "UKOK" Campbell has announced he will vote Tory at the next general election 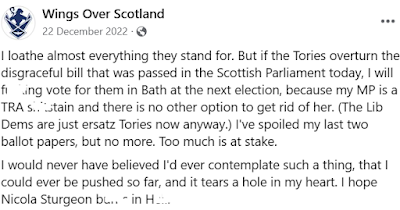 I did wonder if the screenshot doing the rounds today on Twitter of Stuart Campbell announcing he will vote Tory at the next general election was a fake or doctored, because it's a month old and I hadn't previously heard anything about it.  But a couple of minutes on Facebook was all it took to verify that it's genuine, and you can see it above with some of the offensive language blanked out (and by God it's offensive).  So hot on the heels of his announcement that he no longer supports Scottish independence (or, to use his euphemism, that he is "the least Yes he has ever been" and that his "conscience" would now prevent him from campaigning for independence and presumably from voting for it too), we now discover he will actively be voting in favour of continued colonial Tory rule in Scotland next year.
Let's just briefly work through the logic of this, such as it is.  Campbell is explicitly tying his Tory vote to Alister Jack's veto of the GRR Bill - but the snag is that the veto has already happened, so even if you support it, there's no need to vote Tory to bring it about.  (And he knew when he wrote his Facebook post a month ago that the decision about the veto would be made one way or the other long before the general election.)  Effectively, then, what he's saying is that he plans to retrospectively reward the Tories for overruling a decision made by Scotland's elected parliament.  Not only that, but because he claims to find pretty much everything else the Tories do utterly abhorrent, he's by definition suggesting that giving them a little reward for a veto that has already happened is far more important than all of those utterly abhorrent things put together.  That suggests a really quite considerable enthusiasm on Campbell's part for London Tories trampling all over Scottish parliamentary democracy.  What a truly perverse and grotesque position for someone who was still a pro-independence blogger as recently as a few years ago to find themselves taking.

I know some of Campbell's apologists will, as always, point out at this juncture that he lives in Bath.  ("£100,000 a year?  In Bath?!  That disnae go far in Bath, pal.")  Even if someone still supports independence, they'd point out that voting in an English constituency is always a choice of the lesser evil.  Well, that may or may not be true - the Green Party of England and Wales are supportive of their Scottish sister party's pro-indy stance, and have stood in the Bath constituency in ten of the last eleven general elections.  If they do so again in 2024, Campbell will be choosing the anti-indy Tories over a basically pro-indy party, which is natural enough given he has publicly abandoned his previous support for independence.  But in any case, the broader issue is Campbell's stated reason for the fact that he still lives in England and thus votes there - namely that Scotland is the most "gutless" country in the world, because it voted against independence, which awkwardly he would now "gutlessly" do himself.

So let's just recap. Campbell no longer supports independence for Scotland, he supports London overruling the elected Scottish Parliament, he intends to vote in favour of continued colonial Tory rule in Scotland, and he dislikes Scotland so much that he can't bear to live here.  I'd say we've pretty much reached the full house now.

The more you see of the Tories, are you able to take them more or less seriously as a grown up political party? It's a reasonable question, Dennis. You're constantly saying one of the two governments that rule Scotland is unfit for office. How do you feel about the other one?

There's still a deafening silence from Dennis Noel Kavanagh in response to the above question.  I remember when devolution started in 1999, there was a degree of incredulity from certain sections of the English public, with letters to newspapers asking in all seriousness whether English taxpayers would have to "foot the bill" when it all went wrong - the implication being that Scots, uniquely among the peoples of this planet, were incapable of governing themselves and were bound to make a catastrophic mess of it.  You'd think twenty-four successful years of Scottish Governments of different political persuasions governing responsibly (far more responsibly than Westminster, incidentally) would have put paid to that fatuous and deeply insulting narrative, but Tory voters / sympathisers like Kavanagh and Campbell are now using the GRR issue as a wedge to resurrect it.  If you follow their lead by endorsing Jack's imperial veto, you are - whether you realise it or not - lending support to a narrative which leads inexorably to the conclusion that it is irresponsible to let the hapless Jocks continue to run their own affairs, especially as the long-suffering English always have to "sort out their mess" by overruling them, and that therefore something approximating to direct rule from London must be reimposed.

And no matter how strongly you feel about the GRR, remember that there is nothing inherently 'gender critical' about London rule.  In all likelihood we are just over a year away from a Starmer-led government at Westminster that will introduce gender self-ID across the UK.  The only major differences from getting the homegrown Scottish version is that it will be imposed from London, any specifically Scottish concerns will barely be heard, and Nicola Sturgeon will be waxing lyrical about how infinitely preferable it is to do these things on a "Four Nations" basis.  Backing the imperial veto is fool's gold - you're not defeating self-ID, you're just abdicating Scotland's right to make choices on the big issues for ourselves, and you can rest assured the Brit Nats will be duly grateful.

UKOK if you want to, Stu.  The Popper's not for Kokking.

Email ThisBlogThis!Share to TwitterShare to FacebookShare to Pinterest
Posted by James Kelly at 9:45 PM