This is truly historic - the first time that Ipsos-Mori have ever shown a majority in favour of independence.

It's the first post-referendum poll on independence from Ipsos-Mori, so it doesn't necessarily point to a sudden Yes surge out of nowhere.  To some extent, it could even be said to be in line with recent polls from other firms showing a slender No lead, because all pollsters are agreed that there has been an increase in Yes support since last September.  But Ipsos-Mori's distinctive methodology has seen that increase translate into an outright Yes lead, and one of sufficient size to qualify as "decisive" in BBC terms.

Ironically, Ipsos-Mori were one of the most No-friendly firms throughout the long referendum campaign, which meant they showed a much bigger swing to Yes when the 'Great Convergence' occurred at the death.  But it now seems that was simply a waystation on an unlikely transition, and that Ipsos-Mori are emerging as by far the most Yes-friendly firm (of those that have reported recently).

The biggest issue is probably that they don't weight by recalled referendum vote, or indeed by any recalled vote at all.  Instead, they put all their eggs in the basket of demographic weighting.  That carries the risk of there being too many pro-independence voters in the sample, because those may be the people keenest to answer political questions down the phone.  But that can't wholly explain such a favourable result for Yes - remember that Ipsos-Mori's final poll of last year's campaign (published on the morning of polling day itself) overstated the Yes vote by just 2%.  And the early post-September polls from YouGov, carried out before recalled referendum vote weighting was introduced, showed a Yes lead but a much narrower one than we see today.  The most positive interpretation is that today's poll is a very rare telephone poll, and perhaps a 'real world' approach to data collection is picking up a Yes majority that polls reliant on volunteer online panels are missing.

Either way, the very fact that it's a telephone poll makes it that bit more difficult for opponents of independence to dismiss.  Back in the days when Panelbase were the most Yes-friendly firm, Labour people used to make daft allegations that the Panelbase panel had been "infiltrated".  It'll be a bit difficult to make that claim about Ipsos-Mori, who seek out a completely fresh sample of respondents every time.

What we could really do with now is an independence poll from TNS - the only other regular 'real world' pollster on Scottish political affairs.  They use the face-to-face approach rather than telephone, and if they come close to replicating Ipsos-Mori's finding, it could be hugely significant.  (If they don't, of course, it increases the chances that the online pollsters are closest to the mark.)

Make no mistake, though - today is a game-changer.  Until now, it's been possible to make the claim that the polls are broadly showing a small No lead, and that the occasional exceptions have been caused by normal sampling variation.  Today's poll can't be explained away like that - the Yes lead is too big.  So the new reality is that Yes could be in the lead, or No could be in the lead - we can't say which, not even on the balance of probabilities.  That will obviously have an impact on the debate over the timing of a second referendum.

Apologies for taking so long to complete this post, and also for the fact that it's a bit shorter than usual.  As you've probably gathered by now, I'm away on holiday at the moment.  I blogged about independence polls in some unexpected locations last August, but I think today's was the most exotic so far!  If I ever get rich, I'll aim to blog about a 30% Yes lead from a beach in Goa...

Email ThisBlogThis!Share to TwitterShare to FacebookShare to Pinterest
Posted by James Kelly at 4:06 PM 135 comments

George Osborne has a very special treat for Scotland

Just a quick note to let you know that I have a new article at the International Business Times, about George Osborne's grotesque belief that he is 'rewarding' Scotland for voting No by imposing the renewed Trident on us.  You can read it HERE.

I trust you appreciate my dedication to duty, because I wrote it even though I'm on holiday at the moment.  That's not quite as bad as it sounds, because I was on a long coach journey in Italy when I was asked to do it, and I had a few hours to kill anyway.  Feel free to share it on Facebook and Twitter if you like it!

By the way, just to continue burnishing my 'Too Nat' credentials for a moment, I saw a saltire and Lion Rampant fluttering proudly at the sea-front in Ancona today.  I wasn't quick enough on the draw with my camera, unfortunately...

Email ThisBlogThis!Share to TwitterShare to FacebookShare to Pinterest
Posted by James Kelly at 4:46 PM 168 comments

This door needs a good scrub, not an alternative voting system

As you can see from this photo I took this morning in northern Italy, the No 2 AV campaign still haven't got over it.  (I know, I know, I've got a very creepy shadow.) 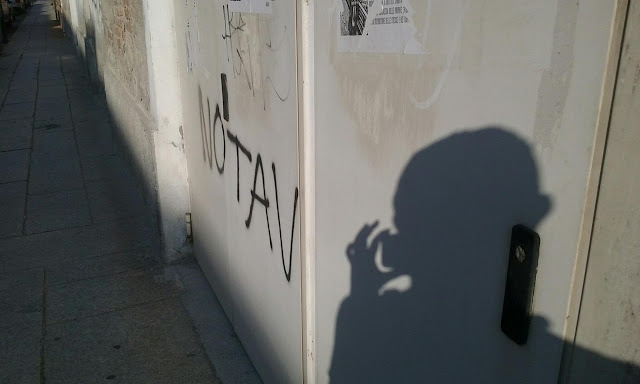 "No TAV" are actually a campaign against high speed rail.

Without getting into the rights and wrongs of Craig Murray's rejection as a potential SNP candidate for Holyrood, I do agree with him that it would be crazy to get into the mindset that we have to wait until Yes are at 60% in the polls before holding a second independence referendum.  That would be like trying to score the perfect goal, and never actually shooting.  It's to all intents and purposes an argument for never having another referendum.  Are we really saying that a steady 55% Yes would be an argument AGAINST going to the country again?

My own view is that the trigger for Indyref II will be an event (like Brexit, but it could be something else), rather than polling numbers.

Email ThisBlogThis!Share to TwitterShare to FacebookShare to Pinterest
Posted by James Kelly at 8:58 AM 28 comments

I travelled through Calais yesterday.  At first it looked much the same as ever, but it soon became clear that the maze of security fences has been vastly reinforced since last year.  And then I saw 'the Jungle'.  Obviously I've seen pictures of it before, but it's quite a shock to the system to see it in real life, partly because of its sheer scale, and partly because it's so out of context with its surroundings - there are middle-class residential houses just behind it.

It really has to be asked - where are Malcolm Offord and 'Vote No Borders' when you need them?  It's high time they went to Calais to remake their life-affirming 'Why Build Another Wall?' video, this time featuring Syrian refugees on the French side chopping their way through the security fences with hacksaws, and Tory councillors from Buckinghamshire doing their bit on the UK side with cutting torches.  When they meet in the middle, they high-five each other, embrace, then hold hands as they joyously jog through the Channel Tunnel, before having a picnic together in the beautiful Kent countryside.

I'm sure Mr Offord would agree that his inspirational 'no borders' vision is for the whole of humanity, not just the Jocks.  Why SHOULD Tory councillors from Buckinghamshire be prevented from spending quality time with Syrian refugees, just because of another bloody wall?

Email ThisBlogThis!Share to TwitterShare to FacebookShare to Pinterest
Posted by James Kelly at 7:51 AM 22 comments