Conservapedia on Gun Control : the solution

Here, belatedly, is the solution to last week's puzzle... 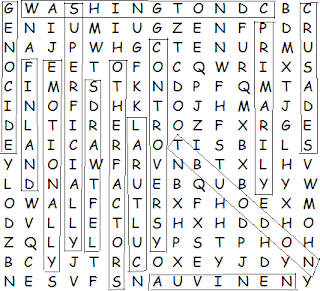 Email ThisBlogThis!Share to TwitterShare to FacebookShare to Pinterest
Posted by James Kelly at 10:07 PM 1 comments

Sorry, Duncan, but the people have spoken...

Well, blow me down with a feather. I can confirm that our poll to decide whether Duncan Hothersall was right or wrong was conducted to the most rigorous scientific standards of online self-selection, and the result was overwhelming...

In true "Bomber Admin" style, I hereby certify the question well and truly ANSWERED.
Email ThisBlogThis!Share to TwitterShare to FacebookShare to Pinterest
Posted by James Kelly at 2:05 AM 4 comments

VOTE NOW : Does calling Tom Harris a toad make me a "nasty Cybernat"?

We've learned a lot of intriguing things about Tom Harris recently, most notably that he wants to be First Minister. We also learned at the weekend from his exchange with Kate Higgins on Twitter that one thing he really detests (almost as much as teenage mothers) is online, self-selecting polls. So I thought the time could hardly be better to hold an online, self-selecting poll all about Tom Harris...

On the last thread, Labour Hame contributer Duncan Hothersall complained that by calling Tom Harris a toad (in the context of the whimsical observation that he wasn't so much a "King Over The Water" as a "Toad Over The Puddle"), I had taken a "step too far" if I didn't want to be considered "just another nasty Cybernat".

You'll find the voting form at the top of the sidebar. Vote wisely!
Email ThisBlogThis!Share to TwitterShare to FacebookShare to Pinterest
Posted by James Kelly at 3:21 AM 8 comments

Bella Caledonia : Sorry to butt in but how's that leadership debate coming along? Found anyone who wants the job yet?

Yes, it's hard to escape the conclusion that Tom sees the prospect of him leading Scottish Labour from Westminster as the equivalent of Alex Salmond doing the same for the SNP for three years, but I'm not sure "Admin for First Minister" is going to have quite the same punch as the slogan the Nationalists were able to use.

Not so much a King Over The Water as a Toad Over The Puddle.
Email ThisBlogThis!Share to TwitterShare to FacebookShare to Pinterest
Posted by James Kelly at 12:10 AM 7 comments

The ache for Hame lives in all of us, the safe place where we can go as we are and not be questioned.

The southern part of Glasgow will be dismayed to learn that its beloved member of parliament has gone all bashful again, and has unaccountably felt the need to publish his latest comic masterpiece - an "interview with Kenny MacAskill" to mark the second anniversary of Megrahi's release - under his "Bomber Admin" pseudonym. Here are a couple of highlights...

"KM: Er… Look, Gordon Brown wanted him released as well – not just me!

LH: And did you consult the then Prime Minister about your decision to release Al-Megrahi?

KM: Are you joking? Of course I didn’t!

LH: So what difference does it make wherther Gordon Brown wanted him released or not?"

Well, I suppose one difference it makes is that it causes some of us to wonder how on earth a Labour website has the brass neck to continue making criticisms of Megrahi's release when even the dogs on the street know that, if a Labour administration had been in power at Holyrood, he would still have been released - but on Gordon Brown's say-so, and for the good of British business, rather than according to the due process of Scots Law.

"LH: And Iain Gray objected to the release, didn’t he? He disagreed with Gordon Brown."

Ah, I think I see where you're going astray here, Tom/"LH"/"Admin". Nominal disobedience to a UK Labour Prime Minister for tactical reasons is a luxury open to a Scottish Labour leader, but only in opposition. Perhaps that's why Iain Gray showed such eagerness to stay there?
Email ThisBlogThis!Share to TwitterShare to FacebookShare to Pinterest
Posted by James Kelly at 5:26 PM 6 comments