Well, actually there are usually several annual Eurovision posts - this is the first year since starting the blog in 2008 that I haven't posted predictions for the two semi-finals.  But don't worry, I wasn't boycotting Israel or anything like that, so there's no need for Fiona Robertson to launch a bigotry inquiry.  I just ran out of time.

I know some of you get mildly homicidal when I start writing about Eurovision, so to sweeten the pill this year I thought I might make a small departure from my usual prediction post, and instead offer you some betting tips.  Even if you're not interested in Eurovision itself, you might be interested in making a little money out of it.  Obviously what you do with this advice is entirely at your own risk - it's just some general speculation about where the value might possibly lie.

The Netherlands, oddly enough, are the red-hot favourites to win this year, and if they do, it'll be their first triumph since the quintessentially dreadful Ding-A-Dong way back in 1975 (a song that Edwyn Collins memorably turned into a Bond theme two decades later).  Over the last few years, strong favourites have tended to win at a canter, but if you go further back, the contest is littered with highly-fancied entries that crashed and burned.  The most recent example was 2011, when France were expected to win but finished a poor fifteenth, which allowed Azerbaijan to emerge from the pack.  In this case I'm fairly confident the Netherlands will finish close to the top of the leaderboard, because the song is likely to be the favourite of the juries.  But whether it wins outright will also depend on the public vote, and that's where one or two doubts creep in.  It's actually possible to bet on the outcome of the public vote alone, and I'd suggest that the eye-catching Australian entry and Russia are both quite generously priced on that front.  Russia are particularly tempting, partly because they're the kings of political voting, and partly because their singer Sergey Lazarev won the televote (but not the jury vote) three years ago.  And at the risk of fuelling David Leask's suspicions, it's not a bad song at all.

When I first heard the UK's song in February, I thought it was "our" best entry for years and years and years, and I still think that, but it clearly hasn't caught the imagination of the fans, and you can get odds of close to 500/1 against a UK win.  In spite of uninspiring staging, I believe the song is significantly underpriced, probably due to fatalism brought about by years of poor UK results.  Probably the most sensible bet would be the 25/1 on offer for the UK to merely finish in the top ten, which seems insanely generous.  (For the avoidance of doubt, I don't think the UK will make the top ten, but I do think there's a greater than 4% chance of that happening.  4% is the percentage chance implied by the odds.)

The catchy-but-appalling San Marino song is also a rank outsider to make the top ten, and that's a semi-tempting one because you can guarantee the public will be voting for it as a laugh.  But you'd assume it'll be hammered by the juries.  (There again, the juries ranked the Israeli novelty song as high as third last year, so anything is possible.)

There are a few other entries that are odds-against to make the top ten, but which might be a value bet - the Czech Republic song is very infectious, Serbia have followed the dramatic Balkan ballad template that proved so successful for them a few years back, and Cyprus have a song that is fairly similar to their runner-up from last year.

And for those of you who aren't interested in either Eurovision or Eurovision betting, here is YouGov's latest Scottish subsample for the European elections.  It's an unusually large subsample of more than 600 respondents, which makes it almost as good as a full-scale poll, because YouGov (unlike other firms) are believed to weight their Scottish subsamples correctly.

Seats projection: SNP 3, Brexit Party 1 or 2, Liberal Democrats 1, Greens 0 or 1
Email ThisBlogThis!Share to TwitterShare to FacebookShare to Pinterest
Posted by James Kelly at 5:18 AM 54 comments

So I received my official Ruth Davidson's Conservatives Election Communication through the door this morning, and a few points leap out at me... 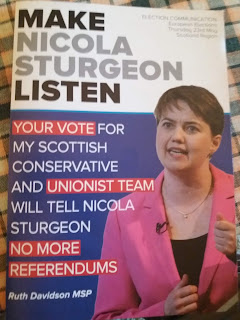 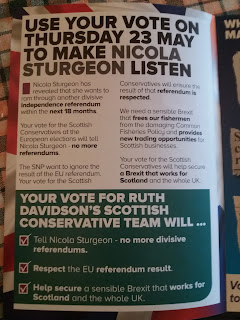 * They seem to have entirely given up on voters with a primarily Scottish national identity.  Note the prominent usage of the Union Jack and the total absence of the saltire.  They've travelled a long way since the likes of Michael Forsyth co-opted the saltire as part of the unionist brand in 1990s.  Now, doubtless their strategists would point out that Ruth Davidson has had greater electoral success than Michael Forsyth, but it does mean they're limiting themselves to a niche market - British identity is much weaker in Scotland than Scottish national identity.  It would be reasonable to suggest that this approach was far more compatible with Davidson's aim in 2016 of becoming the largest opposition party than it is with her current stated objective of becoming First Minister.

* They seem to have entirely given up on Remain voters.  How on earth do you win a majority in Scotland if you only want people who are BOTH self-identifying Brits AND Leave supporters (38% of the population in 2016 and now a touch lower)?  It's even harder now that the Brexit Party seems to have become overnight the natural home for passionate Leavers, which means that the Tories are effectively left chasing after the voters who do want Brexit but don't particularly prioritise it.

* They're testing the credulity of voters with a bizarre juxtaposition between the "no more divisive referendums!" message and their insistence that "the result of the divisive referendum we held ourselves only three years ago MUST be respected!!!!"

* I wouldn't actually rule out the possibility that lazily rerunning the 2017 anti-indyref message could gain some traction - but if it does, that could conceivably split the Brexit Party vote and help the SNP.  I'm not even joking.  If yesterday's YouGov subsample is right about the Scottish Tories only being on 6% of the vote for the Euro elections (a perfectly plausible figure given that the Tory vote across Britain is just 10%), they're well below the de facto threshold for winning a seat, and an extra 1% or 2% of votes for them will be wasted votes.

* If a vote for the Conservatives in this election is a vote to "tell Nicola Sturgeon - no more referendums", doesn't it logically follow that if the Tories are wiped out and the SNP gain a seat (as the YouGov subsample implies will happen), the public must want a referendum?
Email ThisBlogThis!Share to TwitterShare to FacebookShare to Pinterest
Posted by James Kelly at 5:07 PM 96 comments

Could Ruth Davidson be facing an ABRUPT END to her political career? SHOCK YouGov research puts the Scottish Tories in SIXTH PLACE for the Euro elections

Every day seems to bring word of a poll showing even more progress for the Brexit Party, and the latest from YouGov is no exception.

To say that public opinion is fast-moving at the moment would be the understatement of the century.  It seems like no time at all ago that we thought the hardline Brexit vote would be split down the middle between the Brexit Party and UKIP, and that the hardline Remain/anti-independence vote would be split between the Lib Dems and Change UK, perhaps meaning that all four parties might miss out on a European Parliament seat in Scotland.  But the Brexit Party and the Lib Dems seem to have decisively won the side-battles against their ideological cousins, which turns our expectations for the Euro seat allocation upside down.  If by any chance the YouGov subsample is completely accurate, the six Scottish seats would be distributed as follows: SNP 3, Brexit Party 2, Liberal Democrats 1.  There would be no Labour or Tory representation at all - the first time in history that Scottish Labour would have been wiped out in the European Parliament.

Although the Tories slumping to a scarcely believable fifth place across Britain is the most eye-catching aspect of the poll, the Scottish Tories' 6% share in the Euro subsample is also worthy of note.  Will the myth of Ruth ever recover?

As far as the Westminster figures are concerned, this wouldn't be the first time in recent decades that we've seen weird numbers that amounted to nothing when an election came around - remember the SDP surge, or the Cleggasm, or the temporary lead for William Hague during the fuel crisis of 2000.  But I do wonder if this time could be different, particularly if Britain hasn't yet left the European Union by the day of the election and if Brexit passions are still running high.  Almost anything could happen.  I talked the other day about the nightmare scenario of Nigel Farage ending up as Prime Minister, but we shouldn't overlook the lesser-but-somehow-equal nightmare of Jo Swinson walking through the doors of Number 10.  The Lib Dems' 16% share, which looks thoroughly unimpressive compared to the achievements of Charles Kennedy, is nevertheless enough to put them just eight points off the outright lead.
Email ThisBlogThis!Share to TwitterShare to FacebookShare to Pinterest
Posted by James Kelly at 12:24 AM 40 comments