The Survation poll released on Thursday night also contained an independence question.  Independence polls seem to be even rarer than Holyrood voting intention polls these days - we haven't had one since November, which is really quite weird, given that you'd think there would be enormous interest in discovering whether the substantial Yes leads shown by TNS and Ipsos-Mori in September can be replicated in other phone or face-to-face polls.  Unfortunately, the new poll was conducted among an online volunteer polling panel, so it doesn't take us any further forward on the question of whether the TNS and Ipsos-Mori findings were freakish - but it does strongly suggest that the gains made by the Yes camp since the referendum have not been reversed.  For the time being, the uncertainty will continue over just how big those gains have been.

Should Scotland be an independent country?  (Survation, 8th -12th January) :

The fact that the rounded headline numbers are absolutely unchanged makes the calculation of the Poll of Polls refreshingly easy.  Yes remains on the all-time high of exactly 50% reached in the previous update - and there would be an outright Yes lead if an ICM poll that is almost a year old were to be removed from the sample.  The snag, though, is that there's no particular reason to assume that a new ICM poll would show a boost for Yes - the last one may have been relatively good for No because of ICM's methodology, and not because Yes have progressed further since March.

(The Poll of Polls is based on a rolling average of the most recent poll from each of the firms that have polled on independence since the referendum, and that adhere to British Polling Council rules. At present, there are six - YouGov, TNS, Survation, Panelbase, Ipsos-Mori and ICM. Whenever a new poll is published, it replaces the last poll from the same company in the sample.)

Survation asked the EU referendum question as well, and found that the Scottish electorate currently break almost 2-1 in favour of the Remain position.  That result is directly comparable with Survation's Britain-wide online polls, which have consistently shown the race is more or less level-pegging.  Such a huge divergence leaves Colin Kidd looking a bit silly after his Guardian article suggesting that all parts of Britain might easily vote for Brexit, thus scuppering the hopes that a second independence referendum would be triggered by a 'Leave' vote.  In truth, there is very little prospect of Scotland voting Leave.  There may well also be a mountain to be climbed for the Outers at UK level, but if by any chance they do make it to the top, we'll almost certainly find that Scotland and England have voted different ways - and no amount of SNP ambivalence or tactical voting will change that fact.  Neither is Kidd correct in suggesting that UKIP's Scottish seat in the European Parliament is evidence that Scottish and English public opinion is less different than is commonly supposed.  All we have to do is look at the vote shares - on a low turnout, UKIP received 10.5% of the Scottish vote in 2014, which is more than 6% lower than they managed in London (by far their weakest region in England).  Their Britain-wide figure was 26.6%.

If I was going to hazard a guess, I'd say that Kidd is a pro-European professor casting around for ways of shocking Nicola Sturgeon into campaigning passionately for Remain.  But I doubt if she needs much persuading on that score, which is just as well given the total implausibility of Kidd's pitch.

Email ThisBlogThis!Share to TwitterShare to FacebookShare to Pinterest
Posted by James Kelly at 6:32 AM 79 comments

Considering how close we are to the potentially hugely important fifth election to the Scottish Parliament, we haven't exactly been spoiled with a tonne of polls recently - there has only been one over the last few weeks (from TNS).  In particular, the regular Survation poll for Cleggy and the Vow-Meisters has become a very distant memory, but the drought has finally been broken tonight.

The fieldwork was conducted between the 8th and 12th of this month, so is bang up to date.  As far as I can see, the Record report doesn't specify the data collection method, but the figures look so similar to previous online Survation polls that I'd very surprised if this turns out to be a phone poll.  (That said, we have extensive anecdotal evidence that Survation have been doing phone polling in recent months - probably private polling for a political party.)

The percentage changes listed above are from the previous Survation poll in September, and as far as the SNP and Labour are concerned are so tiny as to be of no statistical significance whatever.  So it looks very much like the state of play between the two largest parties has remained frozen in time over the last four months, in spite of the Corbyn factor, in spite of the Michelle Thomson and Natalie McGarry controversies, and in spite of all the other muck the unionist parties and media have attempted to chuck at the SNP.

The Conservatives, on the other hand, can perhaps be permitted to feel modestly encouraged by this poll, because it's the first proper semi-corroboration for the jump in their support shown by Ipsos-Mori a couple of months ago.  If they are making progress, the most obvious explanation is that working-class voters in Glasgow feel that Labour haven't being opposing independence strongly enough.  (***SARCASM SIREN***SARCASM SIREN***)  But it should be remembered that the TNS poll in December continued to show the Tories flatlining, so the jury is still out.

The big cause of concern for the SNP is not the trend, but simply that Survation have once again shown them at "only" 42% on the list, which is slightly lower than they achieved in the 2011 election, when of course they required a minimum of twelve list seats to win the overall majority that ultimately secured an independence referendum.  As things stand, they may be doing just about well enough to win on constituency votes alone this time, but they don't have much margin for error to play with if their support starts to slip, or indeed if their vote is being overestimated by Survation.
Email ThisBlogThis!Share to TwitterShare to FacebookShare to Pinterest
Posted by James Kelly at 10:43 PM 78 comments 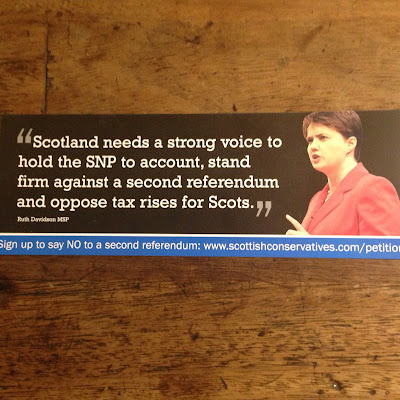 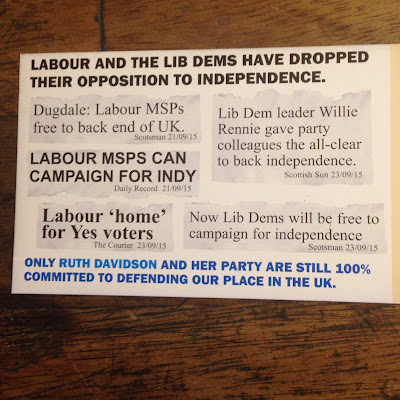 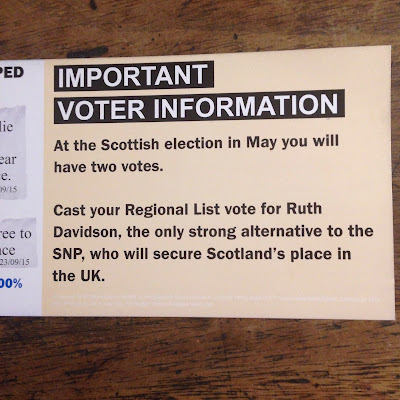 At the weekend, Juliet Swann and I were tentatively talking about the possibility of publicly debating each other on the issue of "tactical voting on the list", possibly via live stream.  I know next to nothing about live streaming, though, and I see that the most popular platform is far from being free to use.  If anyone has any suggestions about how the idea can best be taken forward, feel free to drop me a line.
Email ThisBlogThis!Share to TwitterShare to FacebookShare to Pinterest
Posted by James Kelly at 6:23 PM 113 comments

You may have seen earlier this evening that within two minutes of the Sunday Herald tweeting that they had a story about the SNP manifesto omitting a commitment to a second independence referendum, Nicola Sturgeon had replied with the following denial : "News to me!  Manifesto not finalised yet."  Predictably, Kenny "Devo or Death" Farquharson went straight into all-out Brit Nat Troll Mode, describing Sturgeon's tweet as a "non-denial denial", and implying that the plan is to never hold a second referendum.  In truth, though, it's the Sunday Herald report that is a non-story story.  It simply states that SNP sources have indicated that there will not be a "firm pledge" for a referendum.  I suspect there are more people who think Saddam Hussein is alive and well and ready to attack Britain within 45 minutes than who think the SNP are about to make an unconditional pledge for a referendum.  The question at hand is whether the option of holding a vote before May 2021 will be left open, and if so, how strong the language is and what the potential triggers will be.

The Sunday Herald report doesn't have a concrete answer to that, although it hints that a significant shift in public opinion could be taken into account.  It also suggests that Brexit could be a trigger.  That's what we thought anyway, so Farquharson seems to be getting himself worked up over very little.  (Incidentally, the article characterises the chances of a new referendum as "remote" in the absence of a "dramatic event" such as Brexit.  In a two-horse race like the EU referendum, would it really be so dramatic if the side leading by 43% to 36% in the most recent poll were to win?)

Jim Sillars is quoted as saying he would prefer a "floating mandate", ie. a promise that a referendum would definitely be held if certain circumstances come about.  That would be my own strong preference as well.  It's not a million miles away from what is being hinted at anyway, because it would always be open to the SNP to decide for themselves whether the conditions had arisen.  But it's not ideal if SNP sources are allowing themselves to be interpreted as saying that the wording being planned wouldn't constitute a clear mandate to hold a referendum, if that proved necessary.  Hopefully, the effect of the reaction to this story may be to make the SNP leadership realise that they would be far better to upgrade the manifesto wording from "we don't rule out a referendum" to "we will only hold a referendum if X, Y or Z happens".

The danger of SNP supporters being seduced into "tactical voting" for smaller pro-independence parties may be rapidly receding, but there's still a chance that some of them might make a more principled switch if Nicola Sturgeon gives the impression (however misleading) that she is cooling on independence.  I gather that RISE, for example, are making an unambiguous promise of a second referendum within the next five years, which is clearly a potentially attractive pledge for many Yes voters.  There's a happy medium here that can easily keep the pro-SNP coalition united in May, and I would suggest the leadership ought to seize it with both hands.
Email ThisBlogThis!Share to TwitterShare to FacebookShare to Pinterest
Posted by James Kelly at 1:21 AM 99 comments