You may have heard that there's a new Britain-wide YouGov poll out showing a significant drop in Jeremy Corbyn's personal popularity.  For my money, though, the bigger revelation from the poll is that it suddenly looks like the Liberal Democrats have made a catastrophic mistake by electing Vince Cable as their new leader.  (In fairness they didn't have much choice, given that nobody else wanted the job, for a variety of implausible and pompous reasons.)  Cable's net rating is a dismal -27, which is exactly the same as Theresa May's.  Presumably that can be explained by his involvement in the Tory-led coalition between 2010 and 2015, but it's quite surprising that the passage of time hasn't succeeded in rehabilitating him.

Speaking for myself, I find it difficult to dislike Cable, and he's obviously a serious figure.  I reckoned it was probably in the Lib Dems' own best interests that Jo Swinson had allowed him to take the job (regardless of what her real reasons for doing so were), but it looks like I was wrong about that.  Swinson was in it up to her neck during the coalition period, but the public probably aren't as aware of her role as they are of Cable's.  She would have started with more of a clean slate, however undeservedly.

The Liberal Democrats' collective rating has slipped from -20 in the immediate aftermath of the general election to -33 now, and the obvious suspicion is that this has been caused by Tim Farron being replaced by Cable.  It's hard to see what else has changed for the worse in the intervening period.
Email ThisBlogThis!Share to TwitterShare to FacebookShare to Pinterest
Posted by James Kelly at 3:30 AM 34 comments

After a delay of a few days, the datasets for the new GB-wide BMG poll have finally appeared.  In spite of the Conservatives holding a narrow lead across Britain (unusual in polls since June 8th), we once again see the now-familiar sight of Colonel Davidson's Scottish Tories in third place in the Scottish subsample...

There isn't much doubt that the SNP remained competitive, and probably held the lead, in the immediate aftermath of the election.  The question now is whether that remains the case, or whether Labour's position has quietly strengthened during the second half of summer, which has seen very little polling of any sort.

Email ThisBlogThis!Share to TwitterShare to FacebookShare to Pinterest
Posted by James Kelly at 11:01 PM 24 comments

The world hasn't seen a debate as fierce as this since the fateful day Donald Trump first uttered the word "covfefe".  Up and down the land, co-workers have been arguing, marriages have become strained, children have been pleading with their baffled mothers, and it's all in search of the answer to one simple question: what exactly did Bella Caledonia mean when it tweeted this?

"Mind-numbingly bored of mid-spectrum bloggers spewing their p*** and bile into the public sphere."

Countless domesticated Cybernats begged Bella to be let in on the secret of what a "mid-spectrum blogger" actually is, and which particular mid-spectrum bloggers the tweet was referencing.  No explanation was forthcoming (although, let's face it, a number of us probably weren't going far wrong if we thought we felt our ears burning).  Having done a bit of historical research, I can reveal that this isn't even the first time that the mystery phrase has been given an outing.  Back in March 2015, Bella said the following in an editorial about women-only shortlists -

"I for one am getting bored by mid-spectrum male monotone bloggers who can only speak in the language of anger."

That doesn't actually shed any more light on the situation, because no clarification was provided in that article either.  However, it seems to confirm that Bella has a very well-developed notion of what a "mid-spectrum blogger" is, even if that isn't being shared with the rest of us.  In the absence of any hard facts, here's some speculation about the various possibilities...

1) Autism.  Bella might be suggesting that certain undesirable bloggers are either autistic or have characteristics that are comparable to autism.  Admittedly it seems highly unlikely that Bella would use quite such a tactless insult, especially not on two separate occasions, but the possibility can't be entirely ruled out, for the obvious reason that the word "spectrum" is most commonly used in relation to autism.  People with Asperger's Syndrome and the like are regarded as having "high-functioning autism", those who are severely autistic are regarded as having "low-functioning autism", and those in between are "mid-spectrum".

2) Liberal Democrats.  Bella could be complaining about bloggers who are in the middle of the political spectrum.  Again, that seems a bit of a stretch, but from a RISE perspective "centre-left" may well seem like a downright catty barb.

3) Unexceptional talent.  The spectrum Bella is referring to could be that of ability, with the high-spectrum wordsmiths of Bella (a website I've written for twice, I hasten to add) being contrasted with the mid-spectrum oiks who lower the tone pretty much everywhere else.  But this theory fits in a bit too neatly with the deeply unfair perception of radical left writers as comprising an elitist "Byres Road Cappuccino commie set" that regards itself as intellectually and morally superior to the rest of the Yes movement, so for that reason I'm sure it can't possibly be correct.

4) ZX Spectrum users who prefer the middle of the keyboard.  (Self-explanatory.)

Feel free to chip in with any other suggestions.  We'll get to the bottom of this, no matter how long it takes.
Email ThisBlogThis!Share to TwitterShare to FacebookShare to Pinterest
Posted by James Kelly at 1:36 AM 28 comments

Will "The Democrats" respect the Scottish democratic process?

James Chapman, the former political editor of the Daily Mail, seems to think he's the British Emmanuel Macron.  That's questionable enough, but in fact he thinks he's more than a Macron, because apparently his new political party "The Democrats" is going to save us all from the historic error of Brexit.  Well, good luck with that one.

Bizarrely he's already announcing firm policies for this as-yet-unfounded party (no internal democracy for The Democrats, it seems) and one of them is that referendums will be completely forbidden in future -

"Referendums will be outlawed by #thedemocrats. We believe in parliamentary democracy"

This raises a couple of obvious questions as far as Scotland is concerned.  Firstly, what does it mean for devolution?  Legal opinion may be divided on whether the Scottish Parliament currently has the power to hold a consultative referendum on independence without Westminster's consent, but there's no doubt at all that it has the power to hold referendums on devolved matters.  Are The Democrats planning to follow in the Tories' footsteps by stripping the Scottish Parliament of some of its current powers?

Secondly, if this ban on referendums is indeed going to be arrogantly extended to Scotland, which parliament is James actually talking about when he uses the phrase "parliamentary democracy"?  With referendums no longer a possibility, the decision on whether Scotland should become an independent country would instead have to be taken by an elected parliament - and logically that parliament should be the Scottish Parliament.  That would of course make the path to independence somewhat simpler, because both of the last two Scottish Parliament elections have produced clear pro-independence majorities.  But if James is instead suggesting that Scotland's constitutional future should be entirely at the whim of a parliament in which only 9% of members are elected by Scotland, that would be rather tough to square with the concept of democratic self-determination.

If I was going to offer a small piece of advice, it would be to choose a completely different name for the party.  There is actually a precedent in Britain for a party called The Democrats, and it's not a happy one.  The merger in 1988 between the Liberals and non-Owenite Social Democrats initially produced a party called the Social and Liberal Democrats, but for everyday use that was shortened to The Democrats to avoid the "alphabet soup" of being referred to as the SLD while in competition with the SDP, the SNP and the SDLP.  The twelve months or so that the name was used proved to be a very dark spell, with the party slumping to just 6% of the vote in the 1989 European elections.
Email ThisBlogThis!Share to TwitterShare to FacebookShare to Pinterest
Posted by James Kelly at 6:51 PM 27 comments

Spotted this on Waverley Bridge when I was on my way to a Fringe show on Thursday night. I was going to sue, but then I remembered that imitation is the sincerest form of flattery. ("Imitation" is not a pun about the Jan Ravens half of the picture, although I've just realised that it could be.) 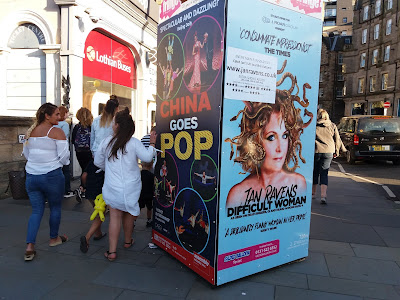 Email ThisBlogThis!Share to TwitterShare to FacebookShare to Pinterest
Posted by James Kelly at 3:30 PM 1 comments