There's a new poll out today that has a bit of something for everyone - republican-minded Yessers are delighted that it shows only a minority of the Scottish public are in favour of retaining the monarchy, whereas the unionist side are claiming it shows opposition to independence.  You won't be surprised to hear, though, that not everything is quite as it seems.

First things first: this is not an independence poll.  If you want to know whether people think Scotland should be an independent country, you ask "Should Scotland be an independent country?", or use very similar wording.  If you turn the question on its head and ask whether Scotland should remain part of the United Kingdom, you tend to get a slightly different result.  That may seem inexplicable, but there are lots of people in the middle who aren't really that bothered one way or the other, and who have a different instinctive reaction depending on how the question is framed.  What makes this poll even less meaningful is that it isn't even about Scotland specifically - it asks about whether the union of four nations should continue in roughly its current form.  If you're a voter with no particularly strong view about Scottish independence, it's highly unlikely that you would give a negative answer to that question.  You would feel like you were tearing someone else's house down because of your uncertainty about where the best interests of your own country lie - ie. just one country out of the four.  You'd have to be a very committed Yesser to reply in that way - and as it happens a healthy enough 30% did so.  A further 18% declined to give a view.

Apologies to any disappointed unionists, then, but this poll does not show an increase in opposition to independence.  It's just a practical demonstration of the obvious point that if you ask a different question you get a different answer.  I have no idea what the poll would have shown if it had asked the standard independence question, but it's safe to assume that the Yes vote would have been significantly higher than 30%.  And as has already been pointed out on Wings Over Scotland, another question in the same poll found that 34% of the Scottish public have become less supportive of the union in recent years, and only 20% have become more supportive.  That's the only genuine indication offered by the poll of the direction of travel.

You might be wondering about the credibility of the poll's methodology.  It was conducted by Deltapoll, which is an entirely new outfit and as far as I can see is not yet a member of the British Polling Council.  However, it was set up by two extremely well-known people from the polling industry (Martin Boon and Joe Twyman), so it's unlikely to be a Mickey Mouse operation.  Apparently the sample size in Scotland was around 500, which is large enough to be taken seriously - albeit only just.  The margin of error is therefore a little higher than it would be for a poll of 1000 or 2000 people.

The poll has Westminster voting intention numbers, which annoyingly are only presented with the Don't Knows left in, but a rough recalculation gives the following -

Just to reiterate - those figures are only approximate, because they're my own calculation with Don't Knows removed.  Not quite as good for the SNP as some recent full-scale Scottish polls from other firms, but bearing in mind the unusually small sample size, there's certainly no cause for alarm.  Even on these numbers, the SNP would be regaining seats from the Tories.

On the monarchy results, the fact that only 41% of the Scottish public support the monarchy doesn't tell anything like the whole story, because only 28% are actively opposed.  Nevertheless, it would have been unthinkable a few decades ago for the hostile and the uncommitted to have a majority between them, so perhaps the establishment should be a tad concerned.  In view of the other results, no-one can really say that the poll was distorted by having too many Nats in the sample!

Last but not least, the poll found that 54% of respondents regard themselves as primarily or wholly Scottish.  Only 14% regard themselves as primarily or wholly British.  31% feel that they are equally Scottish and British.  That's pretty much in line with what the Scottish Social Attitudes Survey has been showing of late.  It remains the case that the independence campaign could win a majority if they persuade people to remove the word "but" from the sentence "I feel Scottish, but..."
Email ThisBlogThis!Share to TwitterShare to FacebookShare to Pinterest
Posted by James Kelly at 3:30 PM 146 comments 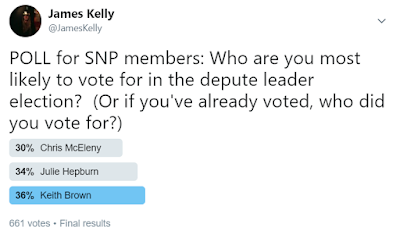 At the very least we can say that there is considerable uncertainty over who is going to become depute leader, and that on the basis of the very limited information that currently exists, it would be foolish to dismiss the chances of any of the three candidates.
Email ThisBlogThis!Share to TwitterShare to FacebookShare to Pinterest
Posted by James Kelly at 5:01 PM 11 comments