Nineteenth subsample in a row puts the SNP ahead

A new Britain-wide YouGov poll is out today, so this may be a good moment to round-up the Scottish subsamples that have been published since my last update.  There have only been a couple...

That means nineteen subsamples in a row have put the SNP in an outright lead.  Just the usual reminder - any individual subsample should not be regarded as reliable, but an aggregate/average of a large number of subsamples can give you a rough indication of what is happening.  The sheer consistency of the SNP lead in subsamples since early September is probably indicative of quite a healthy SNP advantage on the ground, and is very much in line with the message from full-scale Scottish polls (although admittedly we haven't had any of those for a few weeks).

Are there any clouds on the horizon?  Obviously the hysteria over Alex Salmond's new TV show has only just happened, so we'll have to wait and see how that plays out.  It goes without saying that the criticisms of Salmond are hypocritical bilge given that leading politicians from all major parties have been willingly interviewed on the same channel, but on the other hand it is unusual (probably unprecedented) for Nicola Sturgeon to put out a personal statement distancing herself from something Salmond has done.  She and her advisers may have thought that was a safety-first approach, but I suspect the truly dangerous thing is for parties to allow themselves to look divided.  However, it's a very polite division on a relatively minor issue, so in spite of the mainstream media's valiant demands that their readers and viewers should care about this, I expect the likelihood is that we'll look back on it as a 72-hour wonder.

Email ThisBlogThis!Share to TwitterShare to FacebookShare to Pinterest
Posted by James Kelly at 8:59 PM 30 comments

If liberty means anything at all, it means the right to tell people what they do not want to hear

Earlier today, I had a brief exchange with Nick Robinson (former Political Editor of both the BBC and ITV News, and now presenter of BBC Radio 4's Today programme) on the subject of Alex Salmond's new TV show - which is made with complete editorial control by Salmond's own production company, and will be broadcast on RT. 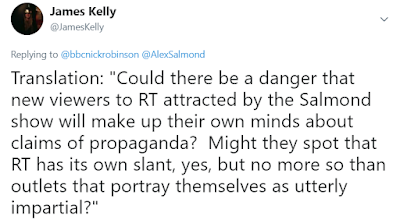 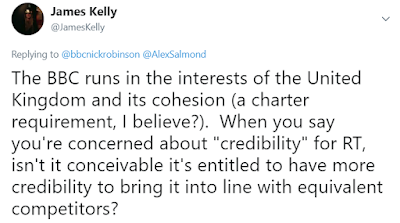 This is my cue to use the immortal words "He didn't answer" (albeit with rather more accuracy than they were originally used).

I realised as I was writing those tweets that I am - somewhat to my surprise - a fan of Twitter's new 280-character limit.  Until a couple of days ago, if I had tried to make points like those I would have given up in despair after realising that it's impossible to condense them into 140 characters.
Email ThisBlogThis!Share to TwitterShare to FacebookShare to Pinterest
Posted by James Kelly at 5:12 PM 12 comments

No, Nicola Sturgeon does not need to apologise for someone else's personal opinions

Now, first things first - there's nothing wrong in principle with a BBC journalist expressing a political opinion on Twitter.  That's what the standard disclaimer "my views, not my employer's" is there to cover - he wasn't tweeting with his BBC hat on.  Nevertheless, there presumably is a line that has to be drawn somewhere - it would, for example, be a problem if Brian Taylor was constantly telling us which party he votes for in general elections, because we would inevitably view all of his political reporting through that prism.  What troubles me is not so much that we now know Gary Robertson thinks the SNP should have declined large game-changing donations in 2007 and 2011, but rather that he believes he's merely stating the obvious and is evidently offended by the idea that any right-thinking person would not dutifully fall in behind him.

Let's be absolutely clear what it would have meant for the SNP to turn down Souter's donations.  In 2007, the odds were - as since the dawn of time - stacked against them.  They were up against much wealthier opponents who could tap into UK-wide funds, and the media were relentlessly hostile.  The Souter donation helped level a hopelessly skewed playing-field, and there was simply no other way that was going to happen.  In a nutshell, Gary Robertson thinks the SNP should have opted out of the chance to properly compete for power on something approaching a fair basis, just so they could look as pure as the driven snow.  That would have been a betrayal of anyone who had pounded the streets for the SNP since 1934 on the assumption that the party was not playing a futile game of cricket, but was instead engaged in a serious attempt to overcome the dirty war fought against them by the media and London establishment, to attain power, and ultimately to win maximum self-government for Scotland.  The 2007 election was so desperately close that it's entirely plausible to say that without the Souter donation there would have been no independence referendum (because the 2011 overall majority was only possible due to the success of the 2007-11 government), meaning that we wouldn't now have a more powerful Scottish Parliament and an enormous contingent of pro-independence MPs at Westminster.  And what noble point of principle would the SNP have been sacrificing their raison d'être for?  None at all.  The donation came without strings.

Maybe once we have public funding of political parties, and once the media has put its own house in order, the SNP will have the luxury of turning down unconditional donations of £500,000.  But not until then.

I'm also slightly baffled as to why Robertson thinks Brian Souter has "policies".  Politicians have policies, but private citizens - no matter how wealthy - merely have opinions.  Perhaps Robertson thought it was only by indulging in the pretence that Souter is the equivalent of an SNP government minister that he could justify the otherwise incredibly silly notion that Nicola Sturgeon should be "apologising" for someone else's personal views.

As for Robertson's question about whether Souter's donations took place within the historical period Sturgeon apologised for in her statement, he should have known the answer to that, because she gave a pretty strong hint that she regarded 2001 as the watershed - that being the year in which the age of consent was equalised at 16.  The vast bulk of what she was apologising for took place on Westminster's watch - most notably, it was UK-wide Labour and Tory governments that eccentrically kept sex between men a criminal offence in Scotland for well over a decade after it had been legalised in England and Wales.  The short post-devolution period covered by the apology was during the Labour-Lib Dem coalition government at Holyrood, and ended six years before Souter's first donation to the SNP.
Email ThisBlogThis!Share to TwitterShare to FacebookShare to Pinterest
Posted by James Kelly at 5:07 AM 24 comments

Penny for the Guy

A few years ago I stumbled across a BBC drama series from the 1970s, confusingly called 1990 because it was set in a dystopian Britain of the near-future.  It starred Edward Woodward at the peak of his powers, but it doesn't seem to be as well-remembered as his other series like Callan and The Equalizer.  I think probably the reason is that it's a bit of a mixed bag - some aspects of it work very well, while other things occasionally snap you out of the fake reality you're presented with.  For example, in Britain of 1990 the crown jewels have been literally sold off, the House of Lords has been turned into a politicians' drinking club (how would you tell the difference?), and the pound sterling has been replaced by the "Anglo-Dollar", which just doesn't ring true as a name.  (Unless it was imposed by the Americans themselves, of course, but that's not the storyline.)  There's an unintentionally hilarious bit in the final episode of Series 1, where an old man recounts the sorry tale of Britain's descent into totalitarianism, and he says something like "it all began when they brought in that Value Added Tax in the early 70s..."  That must have sounded a bit daft even at the time of broadcast.

And then there's the whole issue of Europe.  Weirdly, Britain is supposed to have remained in the European Community and the Council of Europe, and therefore is still fully subject to the European Convention on Human Rights - which it circumvents by means of various technicalties, even though citizens are routinely denied all sorts of basic rights such as the right to travel, the right to free expression, and the right to a private life.  When I first saw the series, I thought it was wildly implausible that European leaders would ever allow any country to get away with such a thing, or at least not without facing expulsion...which means I now need to urgently introduce my naive former self to a certain Mr Guy Verhofstadt, who seems hellbent on ensuring that 1990 proves to be an uncannily accurate prophecy - albeit in real life the rogue state is Spain rather than the UK.

Verhofstadt's latest Facebook post about the Catalan crisis is typically grotesque.  It's thinly disguised as a rare criticism of Spanish actions, but in truth his only quibble seems to be that the taking of political prisoners is a tactical blunder that might allow the filthy law-breaking "separatists" to paint themselves as martyrs, thus helping them to do well in the December election.  He suggests that there should be "other ways" to ensure that the jailed politicians "receive a fair trial", by which he seems to mean a delay of legal proceedings until the election is over.  At no point does it even occur to him to question why elected politicians in an EU member state should be facing trial at all for the supposed "crime" of implementing the manifesto on which they were elected.  He fatuously signs off with an image of demonstrators holding up a banner reading "all we need is talk" - well, exactly what interest has Verhofstadt ever shown in genuine dialogue that puts the two sides of this dispute on an equal footing, rather than putting one side in the dock of a Spanish court?  I think we know the type of dialogue he has in mind - it'll be a cosy chat between the Spanish government and a puppet Catalan regime, in which they furiously agree with each other about how the Spanish constitution must be respected and how independence is a complete non-starter.

If you were particularly 'lucky', you might have heard me on the radio this morning.  The Bauer network (ie. Clyde 2, Forth 2, etc.) invited me on because of something I tweeted the other day about what appeared to be an enormous Comic Relief-style red nose on the front of a car - but actually proved on closer inspection to be a 'poppy'.  I suppose, in fairness, the whole problem with "poppy fascism" is the denial of freedom of choice, so it would be hypocritical of me to suggest that people shouldn't be free to be as ostentatious as they like with their own poppy-wearing.  But I do feel that there's an inverse correlation between how large or tacky a poppy is, and how close the sentiment behind it is to the original intention of the poppy symbol.

You can hear the radio show on catch-up HERE.
Email ThisBlogThis!Share to TwitterShare to FacebookShare to Pinterest
Posted by James Kelly at 11:16 PM 22 comments