Once upon a time, Tony Blair offered this trademark piece of creative ambiguity to the Labour conference -

"And the problem is I can apologise for the information that turned out to be wrong, but I can't, sincerely at least, apologise for removing Saddam."

Now if we'd had a Leader of the Opposition worthy of the name, the first question that would have been asked of Blair when parliament reconvened was : "when you say you 'can' apologise for the information on WMDs being wrong, does that mean you are in fact apologising, that you're physically capable of apologising if you wished but you're not actually going to, or something else entirely?" I mean, I "can" play In an English Country Garden on the recorder, but I've no intention of doing so today. Impossible as it seems, though, the cynicism of the Blair non-apology has just been effortlessly surpassed by the current Deputy Prime Minister.

I was genuinely gobsmacked and dismayed in 2010 when Lib Dem apologists for the coalition reacted to the betrayal over tuition fees by suggesting that a stupid mistake had been made - but that the mistake had not been to break the promise, but to make it in the first place. Does honour have no part to play in modern Westminster politics? It seems not - the philosophy is that it's best not to make any watertight promises at all, because every non-cretin knows that you'll just have to break them, and that you'll become very unpopular as a result.

I might have regained a modicum of respect for Clegg if he had proved better than his cheerleaders, and had made the appropriate and honourable apology for tuition fees - namely an apology for breaking the promise, rather than for making it. But oh no. Instead we were treated to yet more drivel about the supposed utter impossibility of the pledge ever being kept. Well, that's odd, because the promise (which was practically signed in blood) was not in fact to guarantee that a rise in tuition fees would be blocked, or to change the minds of anyone in the Labour or the Conservative parties. It was much more narrow than that - it was simply a guarantee that Liberal Democrat MPs would vote against any increase in fees. There may be many things in this world that Liberal Democrat MPs cannot control (thankfully), but how they themselves cast their votes in parliament is not one of them. It simply requires walking through a door. Were you really not "absolutely sure you could deliver" your own MPs through a door, Nick?

I'm beginning to wonder if he can even deliver the milk.
Email ThisBlogThis!Share to TwitterShare to FacebookShare to Pinterest
Posted by James Kelly at 3:14 PM 1 comments

Why my sympathy for Kate over the topless photos is limited

I suppose I can see as a matter of principle that it's objectionable to furtively photograph a woman with a telephoto lens while she is sunbathing topless on secluded private property, and then to publish those photos.  But somehow I'm totally unmoved by the revelation that Prince William is "incandescent with rage" on his wife's behalf.  Nor am I inclined to fall dutifully into line with Nicholas Witchell's demand for us to see the Royal couple as uniquely put-upon victims who are showing extraordinary dignity in impossible circumstances.  And I'm not sure my reaction is entirely irrational.

The Royal Family claims to be (and is claimed by others to be) "above politics", but in truth it's a thoroughly political institution.  As Gerry Hassan recently reminded us, their position at the apex of the constitution even affords them power to veto or influence legislation in secret.  The frighteningly effective propaganda operation to justify the continuation of such unjustifiable privilege is not in place for us, or for the British tourist industry as we're sometimes risibly told - it's entirely there for them, and for other members of the establishment who benefit from the constitutional status quo.  The choice of Kate for William's spouse was part of that propaganda operation, and was thus a political act.  Yes, I'm sure it was a love match, but it was a highly convenient one, and if William had chosen "unwisely" we can safely assume he would have been quietly asked to think again, just as his father was more than three decades ago.  The projection of Kate's beauty and charm is entirely political, and when it goes awry as it did in France it's a political mishap.  We don't generally feel particularly sorry for politicians who suffer mishaps in their propaganda operations, so why should we react any differently in this case?  The royals scarcely need any sympathy from the likes of us, anyway - they're already guaranteed the type of unquestioning sympathy from even "neutral" segments of the media that would make any self-respecting politician blush. Instead of sceptically scrutinising the exercise of political power on the part of the royals, the media are happy to uphold the embroidered fantasy of Kate as a storybook princess, a uniquely special and virtuous person, above the rest of us, whom the normal rules do not apply to, and who is therefore degraded by being seen minus a few of her clothes in a way that would only otherwise apply to the Pope's wife.

By the way, it's political on Kate's own part as well - she chose this life for herself in order to accrue power, which can be reasonably characterised as political power.  I can hear the romantics out there saying "she can't help who she fell in love with", but that doesn't wash.  Her fateful choice was not to marry William, it was to accept the role of future queen.  If the right to live in peace and quiet with the person you love is all that matters to Kate and William, they had the option of marrying, renouncing all claim to the crown and living as private citizens.  And if unauthorised topless photos of Kate had been published in that scenario, she'd have deserved all the sympathy and legal protection she got (even though it was more than any other female celebrity could have expected in identical circumstances).  As it is...not so much.
Email ThisBlogThis!Share to TwitterShare to FacebookShare to Pinterest
Posted by James Kelly at 5:20 PM 3 comments

Apologies for the shameless 'politicisation of sport' title, but as the saying goes, what goes around comes around.  So Andy Murray is "British not Scottish for life" is he, Mr John Crace of the Guardian?  Well, the man himself seems to disagree -

'You made me very proud to be Scottish today'

- and so do the vast majority of the thousands who lined the streets of Dunblane this afternoon, as you'll see from the photos below.  As usual, your roving Scot Goes Pop photographer was on the spot for the big moment, once again scaling heights of distance, blurriness and general mediocrity that the mainstream media can only dream of.  Oh, and Brit Nat zealots of a nervous disposition may want to look away now... 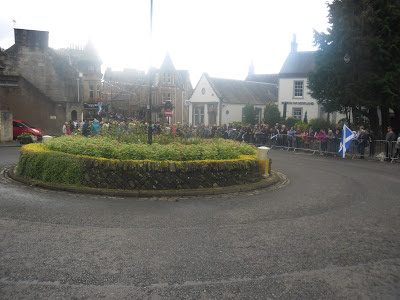 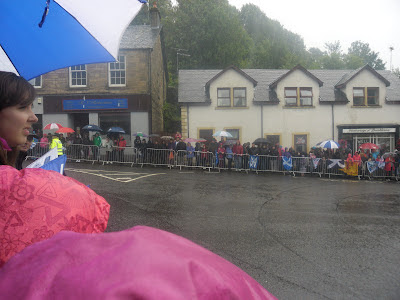 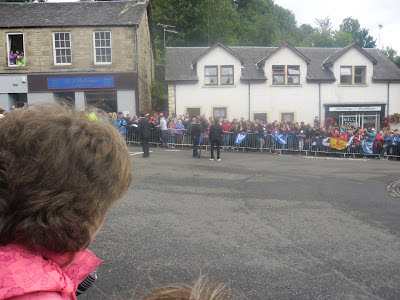 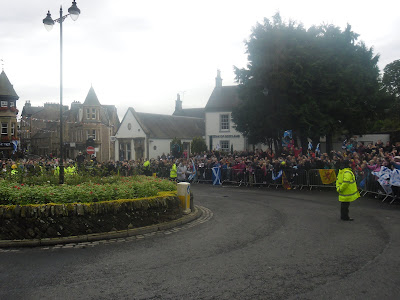 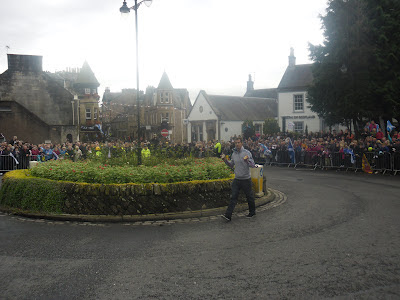 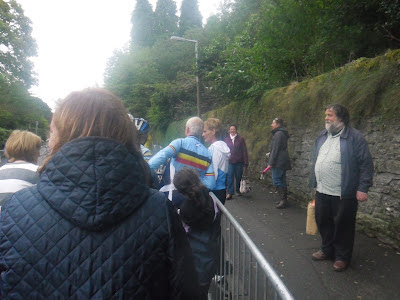 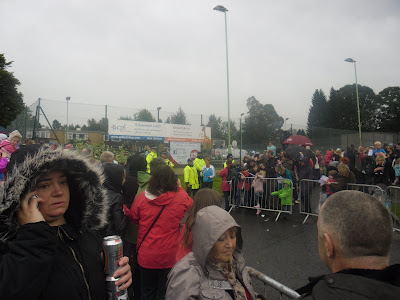 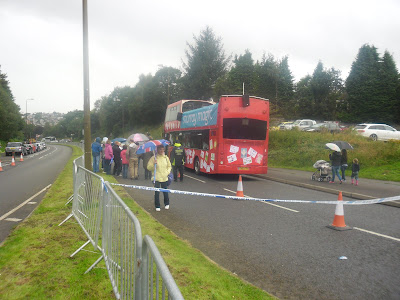 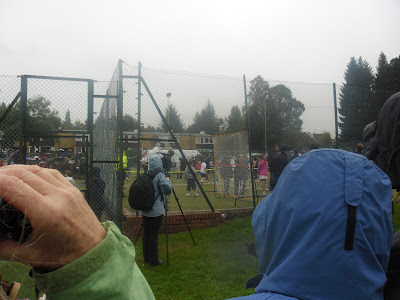 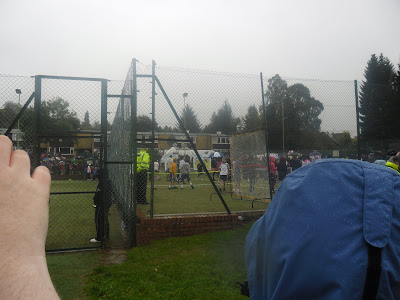 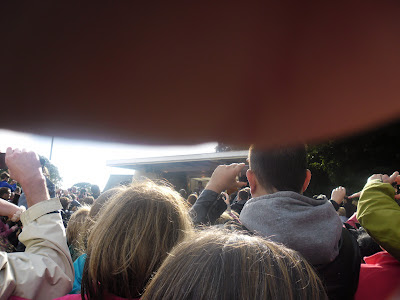 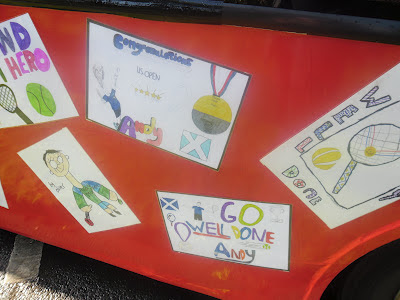 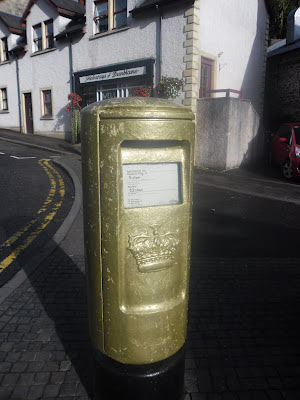 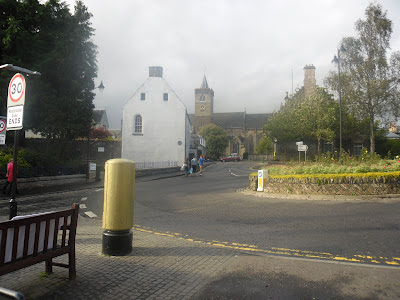 (Click on any photo to enlarge)
Email ThisBlogThis!Share to TwitterShare to FacebookShare to Pinterest
Posted by James Kelly at 6:52 PM 7 comments