I was a bit disconcerted last night when I heard that Labour had "gained a seat from the SNP" in a local by-election, but as is so often the case with STV by-elections, things weren't quite as they seemed.  The SNP were "defending" the seat in the spite of having lost the popular vote in the ward last time around, and they actually moved ahead of Labour to win the popular vote yesterday.  They then perversely lost the seat anyway due to Tory voters breaking almost four-to-one in favour of Labour on lower preferences.  So, other than the fact that the "Auld Alliance" from 2014 is alive and well, and the fact that Irvine West will now have to put up with a Labour councillor rather than Nicola Sturgeon's dad, the nominal "Labour gain" is of very little significance - the underlying trend is still the familiar one of Labour support draining away in former heartland areas.

Much the same trend was seen in yesterday's other by-election in Renfrew South and Gallowhill - except here, the SNP built up enough of a first preference lead to actually gain the seat from Labour, even allowing for the "Tories for Corbyn" factor.

So the average pro-SNP swing yesterday was around 5.8%, and of course that's measured from the 2012 result, when the SNP were already slightly ahead of Labour nationally. Certainly there's nothing in these results that would call into question the sense of inevitability about what will happen next May - Labour remain firmly on course to lose their remaining local government strongholds, including most obviously Glasgow, which will be a landmark moment on a par (almost) with the fall of Byzantium.
Email ThisBlogThis!Share to TwitterShare to FacebookShare to Pinterest
Posted by James Kelly at 1:57 PM 68 comments

The future of this blog

As long-term readers will recall, the third and most recent Scot Goes Pop fundraiser was run last autumn, and with your incredibly generous help it raised £5680.  As with the previous two fundraisers, the aim was mainly to help cover my own living expenses - and certainly not "running costs", which is the red herring always brought up by the concern trolls. Blogger is a completely free platform and it doesn't have any running costs at all. Although this blog is now considerably more popular than it was prior to 2014, it's still not a Wings or a Bella - there's probably a natural limit of around £5000 or £6000 that any crowdfunder is going to raise, and even that may sometimes prove to be optimistic.  There simply isn't the scope to muck around with expensive bells and whistles.   Writing Scot Goes Pop has been the equivalent of a very time-consuming part-time job (and at the busiest times a full-time job), and that's what the fundraisers have made possible - just about.

In spite of my frugal lifestyle (ahem), and more to the point a few other sources of income, the money from last autumn has now basically gone.  The EU referendum was something of a crossroads - I knew if the UK voted Remain, Scottish politics would go relatively quiet for a few years, and another fundraiser might not even be feasible.  I imagined in those circumstances I would probably start to wind things down, and continue with the blog on a much more limited basis.  As it turned out, things went the opposite way, and I've been planning to run a fourth fundraiser when the time felt right.  Unfortunately, I incurred a large and unexpected expense a couple of weeks ago, so that brought things to a head, and I was intending to get things underway either yesterday or today.  Just my luck that a small number of readers decided that right now was the time to declare all-out war on the way I run the blog.  This was what my inbox looked like yesterday... 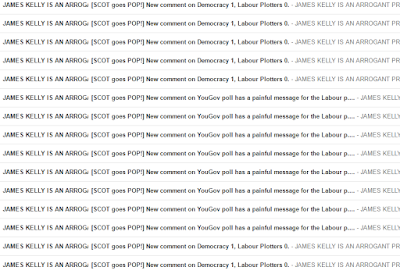 I had to spend about an hour deleting dozens of comments from an anonymous troll, all containing the words "JAMES KELLY IS AN ARROGANT PR**K" over and over and over again.  I strongly suspect this is the same chap who called me a "twit" on Tuesday for disagreeing with his ideas on how the blog should be run, and who then gradually escalated the personal abuse after I informed him that the discussion was closed and started deleting his comments.  Now someone calling himself "Scottish Labour" (who may or may not be the same person) is declaring his intent to repost a comment no matter how many times I delete it.  In a nutshell, people who refuse to accept the very light moderation rules that I apply are now making the blog unmanageable, and it's getting to the stage where I may have to disable commenting altogether as a temporary measure.

I'm not sure whether it's possible to run a fundraiser in these circumstances - some people would just take it as free licence to unleash further chaos.  I'm going to ponder on what to do - I may delay my plans, or I may revert to my 'Remain plan' and blog much less frequently without running a fundraiser at all.  But whatever I do, please note that Scot Goes Pop will continue to run on Blogger (unless the platform changes in some way or becomes too bug-ridden), very light-touch moderation will in general remain in place, and I will reserve the right to delete comments that serve no other purpose than to give me hassle.
Email ThisBlogThis!Share to TwitterShare to FacebookShare to Pinterest
Posted by James Kelly at 1:23 PM 128 comments

I suggested the other day on Twitter that TV detector vans had better be an urban myth, because it's hard to think of a more self-defeating use of licence fee money.  But I think I've found something even more self-defeating - how about using Labour membership fees to launch a costly legal appeal to attempt to prevent Labour members from exercising their right to vote in a leadership election, which is one of the main reasons many of them joined the party in the first place.  It's really not a great look, is it?

Something I have never understood from the word go is why registered supporters, who paid a one-off fee a few weeks ago for the sole purpose of voting in the leadership election, have supposedly demonstrated a greater commitment to the Labour party than people who paid to become full members several months ago.  And yet that is seemingly the logic of the rules that the Labour plotters are trying to reinstate at enormous expense.  It would be nice if at least one journalist gets around to asking them to explain that to us.
Email ThisBlogThis!Share to TwitterShare to FacebookShare to Pinterest
Posted by James Kelly at 2:49 PM 121 comments