Listen to the real FM, Kenny

As you may already have seen, Kenny "Devo or Death" Farquharson fell hook, line and sinker for a tweet from a parody Nicola Sturgeon account stating that "Scotland does not recognise the Republic of Catalunya" and that "the Spanish constitution must be respected".  Emboldened by his belief that the real Sturgeon had made such a wildly implausible intervention, he rather amusingly scolded me for not falling into line with my party leader's edict.  "Listen to the FM!" he said, sternly. 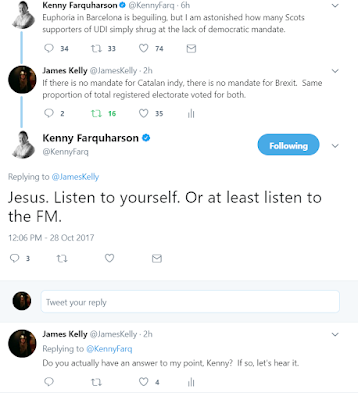 As Kenny's appeal to authority has blown something of a puncture, I'll just take this opportunity to amplify my original point.  17,410,742 people voted Leave in the EU referendum last year, out of a total registered electorate of 46,500,001.  That means just 37.4% of the electorate voted Leave - and yet, on the whole, the UK's political and journalistic establishment don't seem to have any problem with the idea that Britain must withdraw from the European Union on the basis of a mandate that would have fallen short of the notorious 40% rule in 1979.

In the Catalan independence referendum, 2,044,038 people voted in favour of independence, out of a total registered electorate of 5,313,564.  That means 38.5% of the electorate voted for independence - a slightly higher percentage than Leave achieved.  It would of course have been even higher if Spanish police hadn't stolen votes, closed polling stations, and used violence to prevent people from voting.

In fairness to Kenny, I saw the fake Sturgeon tweet when I did a Google search last night, and although I was dismayed by it, for just a split-second I thought it might be real.  It was the "to be clear" that did it - that sounds like Sturgeonesque language.  But when I thought about it I quickly became suspicious and decided to check, because I realised that an explicit rejection of the mandate for independence would have directly contradicted what she has been saying for weeks.  It tells us quite a bit about Kenny's fundamental misreading of the SNP that he didn't become suspicious about a tweet like that, even after reflection.  In reality, given the strength of feeling about Catalonia, there were only really two options open to the Scottish Government - either offer a symbolic "recognition" of Catalan independence (even though a non-sovereign country like Scotland has no power to recognise a state), or just opt out of the problem by neither recognising nor disputing the independence declaration.  They've gone for the latter option - I'm not sure that will be enough to satisfy most SNP members, but I can certainly understand why they've done it.
Email ThisBlogThis!Share to TwitterShare to FacebookShare to Pinterest
Posted by James Kelly at 2:22 PM 42 comments

Depressingly (in one sense), I'm just about old enough to clearly remember Slovenia's unilateral declaration of independence from Yugoslavia in 1991.  I recall the TV reports dripping with scepticism about the prospect of the new "state" receiving recognition from the international community, and positive derision about its ambitions for membership of the European Community (as the EU was then called).  And yet in the blink of an eye, Slovenia had attracted widespread recognition, and within just thirteen years it was a full member of the EU.  None of this is to say that history is bound to repeat itself in Catalonia, but it's a useful reminder that it pays dividends to be sceptical about journalistic scepticism.  These situations often have a momentum all of their own.

I suspect that if the events of the last 24 hours do eventually lead to authentic independence, Catalonia may have a more tortuous journey to follow than Slovenia did.  A hard notion though it is to countenance amid the euphoria of the moment, there may yet have to be a strategic and temporary renunciation of the independence declaration if Spain is prepared to offer a binding independence referendum in return.  Why would the comically intransigent Spanish political establishment offer such a thing in a million years?  Most likely because there is a reasonable chance that Catalonia will prove to be ungovernable under Madrid's puppet regime, if enough public servants switch their allegiance to the new republic and if civil disobedience is widespread.  We don't know yet if that will prove to be the case, but we're about to find out.

Since my last update, four more Britain-wide voting intention polls have been published, and yet again, the Scottish subsamples from all of them put the SNP in the lead.

That means an extraordinary seventeen subsamples in a row have now put the SNP in first place - quite a contrast with the pattern seen between election day and the end of August, when a substantial minority of subsamples were putting Labour ahead.  It does look very much like the SNP's lead dropped significantly during the summer before recovering.  That trend will never be part of the 'official record', though, because the first full-scale Scottish poll after the election wasn't conducted until early September, which if the subsamples are to be believed is roughly the point at which the political weather changed back in the SNP's favour.
Email ThisBlogThis!Share to TwitterShare to FacebookShare to Pinterest
Posted by James Kelly at 2:04 AM 5 comments

There's an article on the BBC website that attempts to explain the system of autonomy in Catalonia - ie. the one that Madrid is today trying to sweep away and replace with a puppet regime.  Unfortunately, however, the article makes a comparison with devolution in Scotland that is astonishingly misconceived in the light of recent events...

"The division of powers between the central government in Madrid and the regional government in Barcelona is not as clear cut as it is in some other countries with devolved authorities such as Germany or the UK.  In the UK, for example, the government in Westminster cannot interfere in Scottish education policy because education is fully devolved."

Oh really?  Agriculture and fisheries are "fully devolved" in Scotland, and yet the UK government are doing a remarkably convincing impersonation of a group of people who think and know that they have the legal right to interfere with Scottish agriculture and fisheries to their heart's content under the cover of a post-Brexit power grab.  The reason?  First of all, the Scotland Act stresses that none of its provisions prevent the UK parliament from "legislating for Scotland".  The only constraint on Westminster legislating on devolved matters is the informal Sewel Convention, which was supposed to have been put on a statutory basis as part of the implementation of "The Vow".  However, earlier this year the UK government successfully argued at the Supreme Court that the whole thing was a con-trick and that Sewel remains legally unenforceable.

Secondly, the Scotland Act specifies that 'the constitution' is reserved to Westminster - an extremely broad category that naturally includes the Scotland Act itself.  So Westminster can simply rip up or modify the devolved settlement at its whim - which is exactly what it is currently attempting to do by means of the Great Repeal Bill.  The only conceivable constraint on that process is Sewel, which is legally worthless (see above).

As I've conceded before, the UK does have a good story to tell in the sense that it's extremely unlikely that a violent Spanish-style crackdown would ever be launched against an exercise in Scottish self-determination.  But the idea that Scotland has some sort of clear-cut legal protection that Catalonia lacks is an absolute fairy-tale.

Email ThisBlogThis!Share to TwitterShare to FacebookShare to Pinterest
Posted by James Kelly at 1:47 PM 22 comments

You may have seen over the weekend that John Rentoul manned up and made a stout-hearted attempt to resuscitate the decomposing corpse of the 'Ruth Davidson for PM' campaign, with an article entitled 'I'm convinced Ruth Davidson could be the next Prime Minister'.  Now, obviously most people reading this blog will share my view that Ruth is All Tank And No Ammunition, and will be aware that under her leadership the Scottish Tories have slipped back to a dismal third place in the majority of recent polls.  However, let's humour Rentoul just for a moment and pretend that the idea of Ruth as a world leader isn't quite as batty as it actually is.  What's missing from the article is an explanation of how it's even practically feasible for her to stand in a Conservative leadership election.

To stand as a leadership candidate, you need to be a Westminster MP.  Ruth is not a Westminster MP.  It is of course theoretically possible to become an MP without a general election taking place by engineering a by-election, but that takes time.  Vacancies for the Tory leadership generally occur rather suddenly (I can't think of even a single exception to that rule in my lifetime), so we're effectively being asked to believe that other potential candidates and the entire Hard Brexit wing of the Tory parliamentary party would be absolutely fine with the start of the contest being delayed for several weeks just so that the darling of Remainers can attempt to stand.  The only alternative would be for her to preempt the issue by persuading a Westminster chum to stand down before a leadership vacancy arises, but that would be seen as an obvious attempt to prepare the ground for a leadership challenge, and thus as a gross act of disloyalty - not just against Theresa May, but against the whole Tory party.  Any needless by-election can backfire, and the Tories know they can't risk losing even a single seat given the current state of the parliamentary arithmetic.

It just ain't going to happen.  She may well want it to happen, but by now she'll have worked out the permutations in her head and realised a plausible route to Downing Street just isn't there in anything like the foreseeable future.

What do you call a man who has already completely and utterly lost the plot and then doubles down?  If I didn't know the guy so well, I'd be rubbing my eyes in disbelief right now.  Round 3 in less than a week from Stormfront Lite's Mike Smithson -

"Remember the ONLY way an election can be triggered before 2022 is by going through the processes set down in the Fixed-Term Parliament Act. This requires two thirds of all 650 MPs to back one, as last April, or else the government losing two votes of no confidence within a specific time table.  In the current context the latter requires both the DUP and the SNP to join with LAB, PC and the LD MPs. The DUP has been bought off for its 10 votes and LAB should be under no illusions about the SNP’s 35 MPs. Nicola’s party got smashed on June 8th and isn’t going to put its remaining 35 MPs at risk by doing anything that would facilitate an early election."

I've already explained five hundred and eighty-three billion times why Smithson's repeated claim that the SNP would prevent an early election taking place is the polar opposite of the truth, so let's just take a moment to marvel at his startling new assertion that the SNP "got smashed on June 8th".  This, ladies and gentlemen, is the election result he is referring to...

That's what the SNP "getting smashed" looks like, apparently.  I hope for the sake of the unionist parties that the SNP never actually win an election.

By the way, on a point of pedantry it's not even true that "the ONLY way" an early election can be triggered is via the processes of the Fixed Term Parliaments Act.  The other way of doing it is to repeal that Act.
Email ThisBlogThis!Share to TwitterShare to FacebookShare to Pinterest
Posted by James Kelly at 6:17 PM 41 comments