Multiple options for a multi-option referendum

OK, I can't resist, one more outing for AM2-watch. In reply to the comments on his latest post berating all three unionist parties for not getting the anti-SNP "core message" right (only a true 'Alpha Male' could imagine that three completely separate political parties are all 'off-message' just because they happen to be diverging slightly from what he personally would like them to say!) he returns to the old red herring of the possibility of independence coming about on a 'minority vote' in a multi-option referendum. The example he gives is one in which independence and the status quo both received 35% of the vote on the first count, and the option of greater powers for the devolved parliament received only 30%. In this scenario, the second preference votes of those who voted for enhanced devolution would decide the result, and it would be perfectly conceivable that they could break in favour of independence. This is not AM2's "idea of democracy", he sniffs. The trouble is this result would perfectly accurately reflect what people had actually voted for - so what exactly is AM2's idea of democracy?

People wouldn't go into the voting booths with their eyes closed. Someone who supported enhanced devolution would know perfectly well that they were answering the question 'if your preferred option is no longer possible, would you prefer the status quo or independence?'. It may seem incredible to AM2 that such a person would opt for independence in response to that question, but if they did so in all conscience where is the problem? How would a majority obtained in that situation differ from one obtained in a single-option referendum on independence where supporters of enhanced devolution would still effectively be giving their second preference? Actually, the only difference is they wouldn't have the opportunity to express their first preference - how is that any more 'democratic'?

But there's a simple antidote to these utterly bogus objections to a multi-option referendum - and that is to conduct it under a run-off system. If none of the three options achieves an absolute majority, a second ballot would be held a week later to choose between the two most popular options. Then, everyone would know exactly where they stand, and there could be no question of anything going through "by the back door" or "on a minority vote".
Email ThisBlogThis!Share to TwitterShare to FacebookShare to Pinterest
Posted by James Kelly at 2:08 AM 5 comments 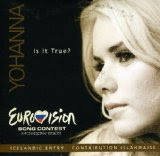 Jóhanna Guðrún Jónsdóttir
Is it true

"Falling out of a perfect dream
Coming out of the blue
Is it true? Is it true?
Is it over?
Did I throw it away?"

Anguish about the collapse of the Icelandic banking system cunningly disguised as a love song.

Having listened to this some more, I'll have to slightly revise what I said previously - it's now my firm favourite of the songs selected so far (not that I've remotely gone off Andorra, you understand). It's not desperately original, and at first it sounds pleasant but unspectacular, but it's one of those songs that really gets under your skin after a second or third listen. Can it win? Songs as gentle as this don't have a fantastic track record of winning outright - in the last twenty years I think the only ones have been Rock'n'Roll Kids and Fly on the Wings of Love (both of which had more of an obvious gimmick than this song), and In Your Eyes (which had a bigger, almost screechy finish). So I wouldn't bet my house on it, but if there's any justice in the world there might just be celebrations rather than economic riots on the streets of Reykjavik in May.
Email ThisBlogThis!Share to TwitterShare to FacebookShare to Pinterest
Posted by James Kelly at 1:27 AM 2 comments

Mauve pigs spotted on Jupiter. In other news, Muriel Gray might vote SNP.

I know it's high time I gave the AM2-bashing a miss, but I can't help but be amused that he actually chose to draw attention to Muriel Gray's article in the Sunday Herald. OK, her stated disdain for the CyberNats was understandably music to the ears of the self-styled 'Alpha Male' of Scottish political blogging, but anyone who remembers Ms Gray's hysterical remarks about the SNP during the 2007 election campaign will instantly spot the true significance of the article. The fact that she's evidently toying with the idea of voting SNP is truly extraordinary!
Email ThisBlogThis!Share to TwitterShare to FacebookShare to Pinterest
Posted by James Kelly at 2:19 AM 10 comments

The latest Scottish sub-sample from ComRes published tonight provides a measure of corroboration for YouGov's findings from a few days ago - both show a significant Labour lead being transformed into a small SNP advantage. This means that three of the last four Scottish sub-samples of UK-wide polls have shown the SNP ahead. The full figures are -

As usual, I'll note that sub-samples of UK polls are inherently unreliable - and indeed because of the smaller sample size this probably applies even more so to ComRes and Populus polls than to YouGov.
Email ThisBlogThis!Share to TwitterShare to FacebookShare to Pinterest
Posted by James Kelly at 12:51 AM 2 comments

As I noted on Twitter earlier, some absolutely dream coverage for the SNP government from the London-based media, all thanks to the bold plans to tackle Scotland's appalling record of alcohol-related deaths, crime and disorder. So much so, in fact, that Newsnight Scotland seemed to feel the need to balance things out by at least nominally presenting a more negative slant, which they did in monumentally contrived fashion. Apparently - see if you can follow this - the SNP are sending out mixed messages by supporting the year of Homecoming, which celebrates the anniversary of the birth of Robert Burns, who it is rumoured may have liked the odd drink or two. Indeed, he may even have mentioned drink once or twice in his poetry.

Is that it? I think even I could have come up with a more convincing example of "SNP hypocrisy" than that!
Email ThisBlogThis!Share to TwitterShare to FacebookShare to Pinterest
Posted by James Kelly at 12:35 AM 1 comments

Very encouraging win for Scotland at Murrayfield, hopefully marking the start of a new era with the Evans brothers at the forefront. But I was slightly bemused by Frank Hadden's comments afterwards - 'with Wales losing last night, this championship is wide open...we think we'll have a big say in it'. Does that mean he thinks Scotland can still win the Six Nations? As far as I can see, even if we win our remaining two games (which would include a first win at Twickenham since 1983), to actually win the championship we'd need Wales to lose to Italy - and then to bounce back from that improbable and crushing defeat by beating Ireland the following week. Oh, and we'd also need France to lose to either England or Italy. And even if all that happened, we probably still wouldn't win the championship because of points difference.

Couldn't we just aim for third or something?
Email ThisBlogThis!Share to TwitterShare to FacebookShare to Pinterest
Posted by James Kelly at 1:30 AM 1 comments