Our future is in safe hands with Gavin Pearson

As we all know, budding DJs are required to take a degree in Un-Self-Awareness at the University of Foot-In-Mouth, and I'm delighted to say that all those years of hard work have paid off handsomely for Gavin Pearson of Clyde 1. Earlier today, he hosted a live music stage at the Merchant City Festival, and between acts handed out tickets to other events at the festival to people who answered quiz questions "correctly". You're way ahead of me here - "correctly" is in inverted commas for a reason. 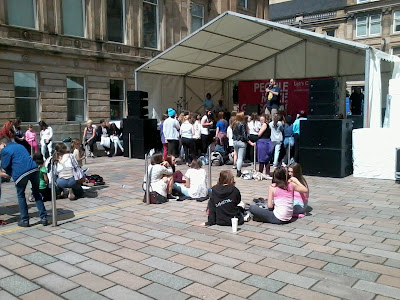 Question 1 was : "What is the capital city of Brazil?" The surprisingly knowledgeable audience shouted out "Brasilia!" in near-unison. But Pearson didn't seem terribly impressed, muttering "nope, doesn't sound right". He turned to the teenage girls near the front (they were there to see the boyband Supernova), and said "help them out here, tell them what the capital of Brazil is". One of them offered "Mongolia" as a suggestion, at which point Pearson rolled his eyes and said "our future is clearly in safe hands, ladies and gentlemen".

"Come on," he implored, "surely someone here knows what the capital of Brazil is!" A voice at the back suggested Rio de Janeiro, which Pearson jubilantly seized upon by saying "Thankyou! At last! Yes, the capital city of Brazil is Rio de Janeiro. Here, come and collect your prize." At which point, quite literally the only member of the audience over the age of 18 who didn't know that Brasilia is the capital city of Brazil was deservedly rewarded for his ignorance with some free tickets. Naturally there were quite a few cries of "No it isn't!" and "You're wrong!", which Pearson was seemingly oblivious to. (And if only I had used the zoom function in the above photo, you'd have been able to see a look of utter disbelief on the face of one of the musicians behind him.)

Twenty minutes later, Pearson was back for more. "OK, as you're all so rubbish at geography and don't even know where Rio is, I'll try a different topic. Now don't call out this time, just put your hand up when you know the answer."

"Brasilia!" shouted a wag at the back.
Email ThisBlogThis!Share to TwitterShare to FacebookShare to Pinterest
Posted by James Kelly at 5:30 PM 3 comments

More evidence that Labour is heading for defeat

Although YouGov have yet to match ICM by producing a poll showing the Tories level-pegging with Labour, the latest one does show Labour's lead down to a wafer-thin three points. More significantly, we're provided with a breakdown of where voters for the three main London parties in 2010 have gone to since. This offers a particularly useful insight into what type of people are currently in the UKIP column. Really the only surprise here is that there are no surprises at all -

15% of people who voted Conservative in 2010 now support UKIP.

6% of people who voted Liberal Democrat in 2010 now support UKIP.

So the conventional wisdom is borne out by this poll - if we can assume that perhaps half of current UKIP supporters will drift back "home" to their previous party by the time of the general election (a reasonable assumption unless Farage is given a place in any TV leaders' debates that may take place), then Labour no longer have a lead in any meaningful sense.

Incidentally, there's no reason to imagine that switchers from Conservative to UKIP are so scunnered with their former party that they're more likely to go the whole hog and vote Labour rather than return to the Tory fold. This poll actually shows that the Conservatives have more 2010 Labour voters in their column at present than Labour have 2010 Tory voters. In spite of his relentless march to the right, Miliband seems to be utterly failing to appeal to former Tory supporters - his slim lead is an artificial product of the UKIP advance and the Lib Dem collapse.

Simply because I'm so impressed that someone actually sent me a personal tweet to promote their Edinburgh Fringe show, I may as well give it a quick plug. It looks quite intriguing - it's called The Confessions of Gordon Brown.

"Gordon Brown hilariously exposes the darkest secrets of being Prime Minister, the stab-in-the-back plotting, the betrayals and most importantly - the hair gel. Love him or loathe him, Gordon candidly reveals what it takes to knife your way to the top and rule a nation. And how his dream of power all went wrong. New play by acclaimed Scots Emmy-nominated writer and director Kevin Toolis in a manyrivers production."
Email ThisBlogThis!Share to TwitterShare to FacebookShare to Pinterest
Posted by James Kelly at 12:59 AM 0 comments

This is something that happens nowhere else in the world

"As a British expat living in East Germany and married to a Ukrainian I couldn't feel more proud and happy to be British right now!"

Yeah, 'cos we Brits can actually deliver a baby. Take that, East Germany and Ukraine!
Email ThisBlogThis!Share to TwitterShare to FacebookShare to Pinterest
Posted by James Kelly at 2:29 PM 3 comments

Congratulations, Mrs Windsor, it's a head of state!

By a rough extrapolation, Kate Middleton's son was just one of the 5000 or so babies born yesterday in the sixteen Commonwealth Realms that share the same monarchy. For all our sakes, we'd better hope that, by some extraordinary coincidence, he just happens to be better suited to the role of Head of State than all of the rest of those 5000 (not to mention the countless millions that will be born on all the other days between now and his accession to the throne). But it does seem somewhat unlikely.

On the plus side, Gordon Brown can sleep a tad more easily tonight. Apparently one of the twenty-odd things that's been troubling him most about the prospect of independence is that the Scottish Parliament might "take a different view on the line of succession for the monarchy" (although why the Scottish Parliament would be any more likely to do that than the Australian, Jamaican or Barbadian parliaments is something of a mystery). Well, now that males are clearly first in line to the throne for the next three generations regardless of whether they are given constitutional precedence over females, that seems to be yet another of the No campaign's "terrifying" imagined futures that we can safely stop fretting about.
Email ThisBlogThis!Share to TwitterShare to FacebookShare to Pinterest
Posted by James Kelly at 3:43 AM 2 comments