Is this controversial journalist David Leask's most cowardly article to date?

As I sit down to write this, there are just two hours and ten minutes of 2022 to go, so I'm not going to attempt a lengthy blogpost, but I don't think it should go completely unmentioned that the controversial journalist David Leask has sunk to yet another new low today by penning an article in the Herald which attempts in a deniable way to link Alex Salmond (and George Galloway for that matter) with anti-Semitism and Nazi sympathies, something he would find impossible to justify if he said it more directly.  The implied logic goes like this - a) there is a history of anti-Semitic Nazi sympathisers in Scotland, albeit mostly in Tory ranks, b) weasel words such as "globalist" are now used as a cover for anti-Semitism, c) "globalist" is also a word used by people who support Putin, d) unnamed politicians who we all know to be Mr Salmond and Mr Galloway presented shows on RT before the Russian invasion of Ukraine, and e) this is all somehow connected.

You are a pathetic coward, Mr Leask.  If you want, without a shred of evidence, to call Mr Salmond a Nazi sympathiser, an anti-Semite, or even one of the Scottish apologists for the invasion of Ukraine, by all means have the guts to try it and see how you get on in court.

I'd just like to thank Scot Goes Pop readers for your continued support during 2022.  November and December in particular have seen the highest monthly levels of traffic to the blog since the Holyrood election in spring 2021, probably due to the flurry of dramatic opinion polls we've had recently.  I'll see you in 2023, and until then I'll just leave you with a crafty selfie I took at the door of Bute House last night.  Who said we Alba folk would never reach The Gates Of Power? 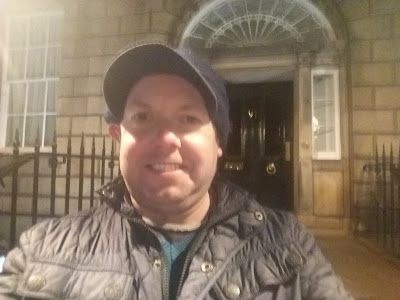 *  *  *
If you'd like to help Scot Goes Pop continue in some form, donations are welcome HERE.
Email ThisBlogThis!Share to TwitterShare to FacebookShare to Pinterest
Posted by James Kelly at 10:18 PM 3 comments

England and the other islands, starring Ian Botham

I'm still feeling a bit lazy after Christmas, but in the meantime here's a thought from a Scot Goes Pop reader about Ian Botham - a man who earned his permanent unelected spot in the UK Parliament through sheer merit, because after all he can bat and bowl.  And making laws we have to obey isn't enough - it was only right and proper that the BBC handed over editorial control of the Today programme to him as well.

"Dear James,
I don't have any online presence, but I do follow a lot of good folk, and so far I have seen no-one comment on the fact that in the oleaginously obsequious 'interview' with the stomach-churning bigot Botham at the end of that broadcast he edited, in the discussion of Brexit, Botham said straight out that 'England' would be fine, and the BBC interviewer did not pick him up on 'England' at all. It was a gift to an interviewer, and it was completely ignored. I once wrote to Radio 3 about such a mistake made by a Danish presenter of an archaeological documentary ('and England became an island') and goodness me, they wrote back very quickly and most apologetically; for as you know, BBC policy is push 'Britain' and GB and UK 113.0573 % round the clock. But for Bottom in Midwinter's Night Dwam, no rules apply.
I cannot remember the exact words of the sentence, but it could doubtless be found on the i-player. I am not signed up, however."
This isn't the first time, of course - a few years ago, Botham famously said "remember, England is an island and we should be proud".  Really quite impressive stupidity from a man who once did a high-profile walk (not swim) from John O'Groats to Land's End, and who has a grandson who plays rugby for Wales.
Email ThisBlogThis!Share to TwitterShare to FacebookShare to Pinterest
Posted by James Kelly at 9:42 PM 33 comments