The right of Scottish Labour MPs to deny equal marriage rights to English people - is this the elusive 'union dividend'?

A few days ago, someone asked me on PB if I couldn't think of some good points to the constitutional status quo.  "There must be something, surely," he said (or at least that was the gist).  After a bit of thought, I eventually came up with the small number of Olympic football matches that took place at Hampden last year - in all fairness, that's something that probably wouldn't have happened under independence.  But if that's the best I could do, you know I was struggling.

But of course there is something else.  Without the union, several Scottish Labour MPs would never have had the opportunity to vote against marriage equality for gay people in England and Wales, on a bill that has no relevance to Scotland at all.  As Duncan Hothersall would doubtless remind us, that's what this whole union shebang is all about.  Internationalism.  Solidarity.  Inequality (but only for English people).

Naturally the six SNP MPs abstained, as they do on all non-Scottish legislation.  When Pete Wishart pointed out that Labour's Willie Bain (a supporter of the bill) and his colleagues perhaps ought to consider doing the same, this was the rather extraordinary Sir Humphrey-esque response -

"I am grateful for that intervention, but I urge the hon. Gentleman to check clause 10, parts 2 and 3, and schedules 2, 5 and 6. He is sure to find that they apply to his constituents and mine in Scotland."

Doesn't that make you feel proud to be British?

"Well done Westminster. Now, before I can get married someone else needs to do something. *stares at Holyrood. Coughs. Stares again*"

I have no problem with the latter sentiment, even though it's just a matter of time. But someone really ought to disabuse Ms Calman of the notion that "Westminster" has actually legislated for equal marriage. It may yet do so. But if you want to make swift progress on social reform, as a general rule of thumb it's best not to have bishops and "elected hereditaries" doing the legislating for you.

If anyone has any lingering doubt that the unelected nature of the Lords compromises Britain's credentials as a fully-fledged democracy, take a moment to consider this authoritative opinion from PB's resident legal expert on why the Parliament Act (ensuring the supremacy of the Commons) is so rarely invoked -

"The reason...is because usually the Lords doesn't reject government Bills in principle, but modifies them. It is generally far more convenient for the government to accept Lords amendments and get their Bill through, than to have the whole Bill in limbo for a year for the sake of a one or two clauses."

There you have it. The unelected Lords is a "revising chamber", absolutely - but it's revision by blackmail. That's democracy, UK-style, folks - and people still have the nerve to ask "what is the problem to which independence is the solution?"

I mentioned Duncan Hothersall earlier - he must be reeling with disbelief at the news that Labour's NEC voted earlier this week to cancel the party's membership of the Socialist International, and to take up observer status instead. Duncan always told us that Labour was nothing if not an international movement - well, it looks like it's nothing. Meanwhile, the SNP of course remains a leading member of the European Free Alliance, a registered European political party that promotes progressive values and democratic self-determination.

I'm sure most of you will already have seen this, but Wings Over Scotland's RevStu has launched a fund-raising appeal to enable him to run the site as a full-time journalistic endeavour. Full disclosure - I haven't personally got round to donating yet (I'm a bit stretched at the moment!), but I do think this is a great cause, and a fantastic opportunity for supporters of independence to make a real difference. Direct funding of the Yes campaign (and of the SNP) is of course absolutely vital as well, but one thing it can't and won't do is address the horrific imbalance in media coverage of the referendum. RevStu's initiative is a rare chance to do something about that.

Don't get me wrong - I don't concur with every dot and comma that RevStu writes, and indeed I passionately disagree with him on some subjects. Regular readers will recall that I clashed with him on NATO membership and the morality of using nuclear weapons. But that isn't the point. The question facing Scotland over the next 21 months is "Independence - Yes or No?", and there is quite simply no better written-word advocate for the Yes side than RevStu. Anyone who reads the site will have seen comments from people who openly admit that they were hostile to independence or undecided until they discovered Wings - but have since been converted. In a modest way, what RevStu does reminds me of how Thomas Paine engaged the hearts and minds of the apathetic majority in the run-up to the American Declaration of Independence, by encouraging critical thought, and by making people realise that they are far more intelligent than they previously believed. In January, Wings reached an unprecedented audience of 30,000 - can you imagine the potential impact if the site could reach ten times that figure? OK, not all of them would be in Scotland, but even if half of them were that would still constitute roughly 3% of the entire Scottish population.

Newsnet Scotland also has a part to play, but Wings is far superior because it treats its readers as grown-ups, and doesn't feed them one-dimensional propaganda. James Mackenzie once said in his (mercifully) inimitable style that "the guy" (RevStu) is "part of the problem, to say the least". Au contraire, monsieur. Whatever else might be said of him, he's part of the solution. Only a part, to be sure, but definitely of the solution. If you agree, you can read the fund-raising appeal in full by clicking HERE.

Of course, every effort to redress the media imbalance always seems to have the shortcoming of being online-only, and this one is no exception. Even in this day and age, there are plenty of Scots who rarely if ever use the internet, and who are therefore unreachable by pro-independence websites. But with time marching on, I suppose we have little option but to restrict ourselves to the art of the possible.
Email ThisBlogThis!Share to TwitterShare to FacebookShare to Pinterest
Posted by James Kelly at 5:56 PM 8 comments

The Mail are manfully spinning this for all it's worth (yes, they even use the traditional words "huge setback"!), but I'm afraid facts are chiels that winna ding - the first poll on independence using the new referendum question approved by the Electoral Commission shows a straightforward 1.5% swing to the Yes side since last month.

That change is within the margin of error, so not too much should be read into it.  However, these figures are strikingly similar to the recent TNS-BMRB poll, which showed a static Yes vote, but a significant number of previous No voters reverting to the 'don't know' camp.

If there has indeed been a recent swing to the Yes side, questions will surely be asked in the No camp as to whether David Cameron's recent speech on the EU is to blame.
Email ThisBlogThis!Share to TwitterShare to FacebookShare to Pinterest
Posted by James Kelly at 11:44 AM 7 comments 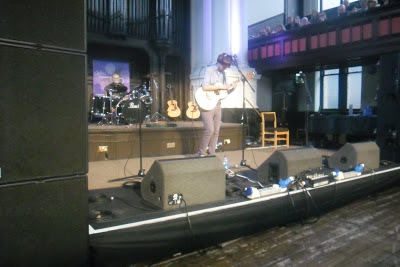 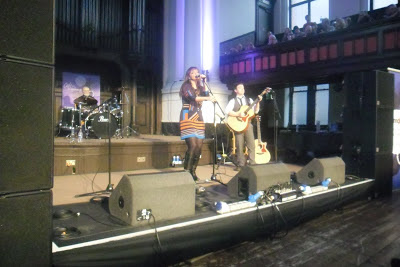 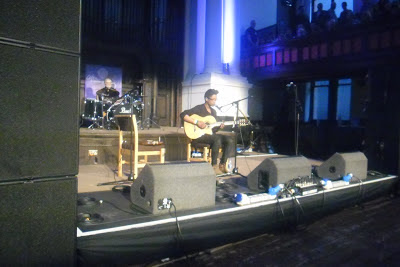 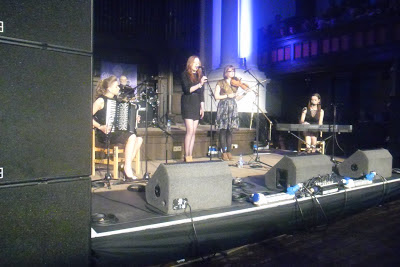 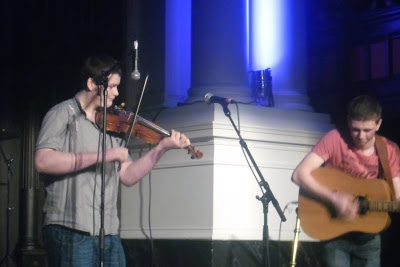 I'm a long-term fan of the Irish folk singer Cara Dillon, so the highlight of Celtic Connections for me was seeing her perform live for the first time, and accompanied by the Scottish Symphony Orchestra. I couldn't make up my mind whether I should buy a ticket - because I know all the songs backwards, in a strange way I thought it might make more sense to spend money on an act I was completely unfamiliar with. But I'm so glad I did decide to go - it was the best thing ever. (Well, maybe not quite, but you know what I mean!) When the orchestra upped the volume, she really opened out her voice, and it sounded amazing. I don't have any photos of that, but most of the concert was broadcast on Radio Scotland the other night, so it should still be on the BBC iplayer.
Email ThisBlogThis!Share to TwitterShare to FacebookShare to Pinterest
Posted by James Kelly at 7:48 AM 1 comments