Stuart Campbell blows his top as he confirms he is now a Tory voter: "I don't give a s**** and you are all unf***able nutjobs"

At least one Wings Over Scotland reader was deeply concerned about the screenshot published on this blog last night showing that Stuart Campbell plans to vote Tory at the next general election.  Several comments have appeared on Wings today suggesting that Campbell has just ensured he will never, ever get a hearing again from independence supporters because his blog will forevermore be dismissed as "Wings Over Toryland", "Tory Over Scotland", "Stu The Tory", etc, etc.

Now, in fairness, Campbell posted about his plan to vote Tory in the heat of anger just after the GRR Bill cleared the Scottish Parliament in the run-up to Christmas, so it was theoretically possible he had calmed down since then and thought better of it.  However, at 12.50pm today, Campbell posted a characteristically angry and abusive reply to the critical comments, and made abundantly clear that he still fully intends to vote Tory.  If a full month of reflection hasn't led him to change his mind, it's reasonable to conclude that the plan is now set in stone and we can henceforth regard him as a Tory voter. 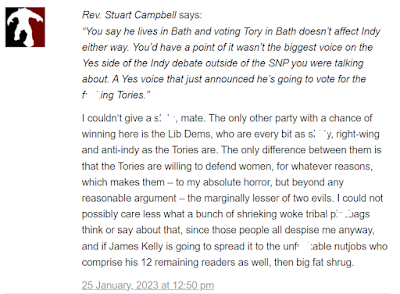 (Swear words have been partly blanked out in the above screenshot.)

So a couple of points to pick up on here.  Firstly, even Campbell's beloved SimilarWeb claimed that Scot Goes Pop received 17,700 visits in December - the last month for what might very loosely be described as their "estimates" are available. So Campbell may possibly be getting carried away with his own propaganda just a tad.  Secondly, the excuse that he somehow has no option but to vote Tory because he lives in a constituency which is a two-horse Tory-Lib Dem race isn't going to wash.  I think most reasonable people on the Left of politics would conclude that if you're forced to make a straight choice between the Tories and the Lib Dems, you choose the Lib Dems to stop the Tories, not the other way around.  There are any number of things wrong with the Lib Dems, but they are unmistakeably less bad than the Tories on social justice, which is what ought to matter most.  In any case, that supposed forced choice is a false choice, and it's easily one that can be opted out of.  As Campbell admitted himself, he spoiled his ballot in the last two elections and there's nothing to stop him doing so again.  That way he would avoid voting for the Tories while not endorsing the Lib Dems either.  The fact is that he's freely making a positive choice to vote Tory.

The other way he could opt out of the bogus forced choice is by giving a principled vote to one of the also-ran parties.  As I pointed out last night, the Green Party of England and Wales (and their predecessor parties) have stood in the Bath constituency in no fewer than ten of the last eleven general elections, going all the way back to 1979.  They are sympathetic to Scottish independence due to their traditional relationship with the pro-indy Scottish Greens - and, no, the little tiff in that relationship doesn't change the basic point.  So by voting for the anti-indy Tories, Campbell will in all likelihood be rejecting an essentially pro-indy party - which in fairness is perfectly logical in view of his recent public announcement that he no longer supports independence.

It also shouldn't pass without comment that Campbell made the barking mad and deeply offensive suggestion in December that he wants Nicola Sturgeon to "b**n in H**l" for somehow 'making him vote Tory'.  As someone pointed out on the previous thread, it's a bit hard to work out how the leader of the Scottish National Party in any way has the power to make a voter in southern England hate the English Lib Dems so much that he's ended up voting for the English Tories to stop the English Lib Dems.

But would Campbell be a Tory voter even if he lived in Scotland?  Based on his statement today, it seems overwhelmingly likely that he would.  His rationale for rejecting the Lib Dems by voting Tory in England would apply equally strongly to rejecting the SNP by voting Tory in Scotland - because the SNP's position on the trans issue is basically identical to that of the Lib Dems.  The only way Campbell might not vote Tory in Scotland would be if there's an Alba candidate, but a) whatever the outcome of the internal debate within Alba about the wisdom of directly challenging the SNP in a first-past-the-post election, it's highly likely that many constituencies will not have an Alba candidate, and b) even if Campbell lived in a Scottish constituency where Alba is standing, he might conclude - just as he has in Bath - that he needs to vote for a candidate that can win, which might lead him to reject Alba and vote Tory depending on the constituency.  Conclusion: it's probable that Campbell would vote unionist in a de facto independence referendum, which leads me to suspect that he may urge his readers to do the same, very much in the way that he used Holyrood polling day in 2021 to tell his readers not to vote for pro-independence candidates on the constituency ballot.

There may be a silver lining to all this, though.  In many ways Campbell's political defection is a remarkable breakthrough for the Scottish New Media, which until now has lacked a reasonably popular pro-Tory site.  That deficiency has now been well and truly rectified.

Email ThisBlogThis!Share to TwitterShare to FacebookShare to Pinterest
Posted by James Kelly at 7:16 PM