WINGS-WATCH: Fact-checking the bogus claims that support for independence was at "25% and falling" in 2007, and then "consistently in the lead" just before Nicola Sturgeon became SNP leader

By popular demand, welcome to our new Wings-Watch service, in which Scot Goes Pop will be - as and when required - fact-checking some of the more dubious and outlandish claims made by the well-known Yoon-curious blog Wings Over Scotland, which recently raised eyebrows by announcing it was "coming back" even though it had never actually closed.

I must admit the first installment of Wings-Watch has come up a lot quicker than I expected, but it's proved necessary because the formerly Yes-supporting Wings blogger Stuart Campbell has chosen to devote his entire "comeback" (sic) blogpost to a lightly rewritten version of several of his previous posts in which he made a number of seriously dodgy claims about opinion polling, in an attempt to buttress his narrative that Nicola Sturgeon's leadership has been a failure.  (Of course, the belief that Ms Sturgeon has failed is perfectly defensible and I don't fully disagree with it, but it's nevertheless important for anyone who claims their output is "journalism" to avoid making bogus or distorted claims of fact to support their arguments.)

VERDICT: Intentionally misleading.  Mr Campbell's text links to a graph from Ipsos UK (formerly Ipsos Mori), which states in the small print that data between 1999 and 2008 comes from the Scottish Social Attitudes Survey.  That survey is not comparable with standard independence polls as we know them today, because it did not ask the binary-choice question "Should Scotland be an independent country?".  It instead presented independence as one of three constitutional options - a format which until very recently almost always produced lower support for independence than standard binary-choice polling.  Furthermore, Don't Knows weren't removed from the Social Attitudes Survey, in contrast to the headline results from standard independence polls in the present-day which always strip Don't Knows out.  Essentially Mr Campbell is presenting readers with an apples-and-oranges comparison to make it look as if Yes support increased between 2007 and 2014 far more than it actually did.

For example, there was binary-choice polling in 2007 which showed support for independence at 39.5% and opposition at 45%.  With Don't Knows removed, that works out as roughly Yes 47%, No 53% - actually a smaller gap than the one recorded at the independence referendum seven years later.  You'll find that pretty much any claim that independence support was lower than 30% at any point in the decade leading up to the indyref depends on the sleight of hand of not stripping out the Don't Knows from a cherry-picked poll that was particularly poor for Yes, and/or using a multi-option poll that is not comparable with current polls.

Actually, Mr Campbell has shot himself in the foot by using the Social Attitudes Survey as his baseline for independence support in 2007, because that decision alone drives a coach and horses through his narrative that Ms Sturgeon has failed to increase the Yes vote.  Unlike conventional polling, the Social Attitudes Survey has found a massive increase in independence support since Ms Sturgeon became leader - it's gone from 33% in 2014 (the last survey conducted when Mr Salmond was leader) to 52% in the most recent survey in 2021.  Indeed, with one exception there's been a steady year-on-year increase - since 2014, the sequence of results has been 33 - 39 - 46 - 45 - 51 - 52.

As long-term readers will know, there is no greater admirer of Alex Salmond than myself, but I nevertheless must profess myself deeply puzzled at the subtext of Mr Campbell's suggestion that independence support was "falling" when Mr Salmond became First Minister in 2007.  Mr Salmond's second stint as SNP leader started in 2004, not in 2007, so if the implication is that he can take the credit for any increase in Yes support between 2007 and 2014, it would presumably be equally logical for him to take responsibility for what happened to independence support between 2004 and 2007.

Wings Claim #2: "After seven years he bequeathed Sturgeon...support for independence consistently in the lead."

VERDICT: Lie.  There appears to have been only three independence polls between the independence referendum and Nicola Sturgeon becoming SNP leader.  Two of those polls showed a Yes lead and one showed a No lead - so it's self-evidently untrue to claim that independence was "consistently" in the lead.  Additionally, one of the two polls with a Yes lead (which ironically was commissioned by Mr Campbell himself) used a non-standard question.

Wings Claim #3: "But none of the last six independence polls, and just three of the last 30, have shown Yes in the lead."

VERDICT: Essentially a lie, with one important caveat.  What I mean here is that Mr Campbell supports his claim with a screenshot from the list of independence polls from Wikipedia, but he's cynically used an out-of-date screenshot which excludes the most recent Ipsos UK poll showing a Yes majority.  Below you'll find an up-to-date screenshot of the same table, taken at 6.34pm this evening, and which as you can see includes the Ipsos UK poll.  So on that basis the claim that "none of the last six" polls have shown Yes in the lead is an outright lie.

The important caveat I mentioned is that the Ipsos UK poll used a non-standard question.  Nevertheless, it's there in the Wikipedia list this evening and that's the list Mr Campbell is claiming as his source.

If anyone was harbouring hopes that Mr Campbell might have a greater commitment to factual accuracy now that he's "returned" (sic) from his "rest" (sic), this would not appear to be the most encouraging of starts. 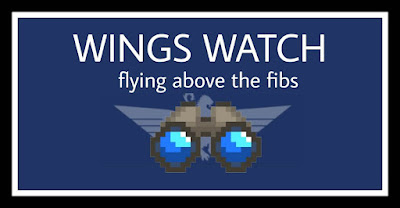 If you'd like to help Scot Goes Pop continue, donations are welcome HERE.
Email ThisBlogThis!Share to TwitterShare to FacebookShare to Pinterest
Posted by James Kelly at 7:10 PM