Sooner or later, the Westminster veto has to be circumvented - there is no realistic alternative

Most of you probably saw Wee Ginger Dug's blogpost last week calling on the SNP leadership to keep its side of the bargain with the independence movement by taking steps to ensure (or at least genuinely try to ensure) that an independence referendum actually happens.  The observation that stood out for me was this -

"What it does mean is that when that referendum does occur, it will be of a confirmatory nature, to confirm the settled decision of the people of Scotland, rather than a contested referendum campaign during which the decision is made and minds made up – rather like the devolution referendum of 1997 when there was little doubt that supporters of a Scottish parliament would win. It appears that the SNP leadership would prefer this second sort of referendum."

That's certainly very much in tune with what Andrew Wilson said during his stint as a pundit on BBC Scotland's election results programme - he suggested that there was the potential to build up an overwhelming majority for Yes, with the implication being that a referendum shouldn't be called until that happens.  Now, of course, Andrew Wilson is not the leader of the SNP, and he has no current active involvement in politics.  But I do worry that the SNP leadership might be wholly or partly buying into his analysis (which I believe to be deeply flawed).  One of the clues is the triumphalism whenever the Tory government denies Scotland's right to self-determination or signals that powers will be stripped from the Scottish Parliament - senior figures within the SNP are always quick to gloat that this will simply further build support for independence, which leads me to suspect that they're trying to replicate the strategy of the devolution campaign in the 1980s and 1990s.  Back then, the Tory government kept saying "no", support for devolution kept getting higher, and eventually the dam burst and a Scottish Parliament was set up with a massive mandate from the electorate.  But there are two crucial differences between then and now  -

1) I'm struggling to see any evidence at all that there is the potential for anything more than a relatively modest majority for independence.  Even the tremendous shock of the UK-wide Leave vote in 2016 only pushed Yes support into the low 50s.  If Brexit proves to be truly disastrous, I can just about imagine the odd poll showing Yes at 60%, but I think sustained support at that level is highly unlikely, and to be honest the idea that we'll have the 3-1 majority that the devolution campaign managed is for the birds.  If that's what we're waiting for, it's tantamount to giving up on independence completely.

2) In the 80s and 90s, one of the two main London parties was committed to delivering devolution, so all we had to do was wait until the pendulum in English politics swung back to Labour - although admittedly there were times when we wondered whether that would ever happen.  The current situation is much less favourable.  The balance of probability is that the Tories will win the 2024 election and that there will be no so-called "legal" route to a referendum until 2029 at the earliest.  But even if Labour upset the odds and win in 2024, it's by no means clear that the obstacles to a referendum will magically disappear.  Let's suppose that Andrew Wilson is right and I'm wrong, and that holding off for years will somehow produce a big Yes lead in the polls.  Even if that's the case, it's absolutely no use to us unless there's some kind of credible strategy for circumventing the Westminster veto sooner or later.  I would hope Nicola Sturgeon doesn't want to end her career as "the leader who polls suggested would have won Scotland its independence if only she'd been allowed to hold a referendum" - that's not much of an accolade at all.

As Wee Ginger Dug points out, there is growing disquiet in the Yes movement that the SNP leadership is perhaps not being entirely straight with us and might intend to let matters drift.  That could lead to some people defecting to fringe pro-indy parties with a more radical offer, and that in turn could cost us the pro-independence majority at Holyrood next year, because those fringe parties have little or no chance of winning any seats.  We mustn't allow that to happen.  If there's a battle over strategy to be won, it can only be won inside the SNP.  Leaving the party will simply clear the pitch for those who want to keep kicking independence into the long grass.

Meanwhile, Robin McAlpine has written one of his trademark provocative pieces in which he compares the SNP's promises of an independence referendum this year with the mythical weapons of mass destruction in Iraq.  I don't disagree with all of it, but I do think Robin overreaches massively in some of his specific points.  It's absolutely ludicrous to see an independence supporter echo John Rentoul's claim that the SNP winning 45% of the vote and 80% of the seats isn't really a mandate at all.  Frankly, if you take a look at how other leading parties in Western Europe fare in multi-party systems, it's fair to say that the SNP's performance last month was close to 'beyond wildest dreams' territory, and anyone who seriously disputes that has lost the plot somewhat.

It's of course a monumental red herring to suggest that the 46% combined vote for pro-independence parties means that we've made no progress since the 45% Yes vote in the 2014 referendum.  A general election is not a referendum, and we know that a significant minority of the rump Labour vote would back Yes in a second indyref.  Labour even took conscious steps to retain the support of those people by indicating that they would not block a referendum indefinitely if the Scottish Parliament votes to hold one.

My impression is that Robin is constantly casting around for reasons to suggest that the SNP aren't doing well enough electorally.  I seem to remember at one point last year he claimed that no poll for years had shown that we were on track to retain the pro-indy majority in 2021.  That wasn't strictly true either, but he's on even weaker ground with his claim that a landslide Westminster election victory isn't sufficient.

As for Robin's suggestion that the SNP shouldn't horde independence supporters, and that more good would be done if Yessers join Labour and the Lib Dems and transform those parties into pro-independence parties...well, that sounds very seductive until you think it through.  It's hard to see how that would ever happen organically - there would have to be a directed strategy behind it, and it's pretty likely that Labour and the Lib Dems would quickly get wind of what's going on and take decisive action against 'entryism'.

Like many of you (most of you?) I was on the march for independence in Glasgow yesterday.  I recorded a few short videos, and if they've turned out all right I might post them on my YouTube channel over the coming days. 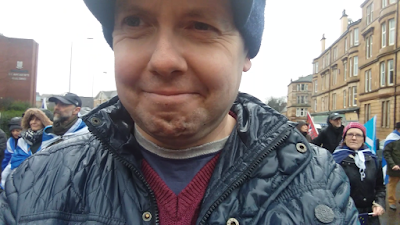 Email ThisBlogThis!Share to TwitterShare to FacebookShare to Pinterest
Posted by James Kelly at 6:18 AM