Poll of Polls – a longer-term perspective

With the frequency of polls increasing now it’s easy to get sucked into trying to draw conclusions from each poll release to try and determine what is happening on the ground. It can be more helpful to take a step back and have a look at the trends in the Poll of Polls over a longer time.

Using James’ excellent Poll of Polls methodology I have been keeping track of PoP trends both for the headline numbers and for the Male and Female data subsets. It’s worth sitting back and drawing some conclusions at this stage.

Looking back over time a few trends are perceptible and of interest to us.

1. NO lead in the Poll of Polls (data including Don’t Knows) 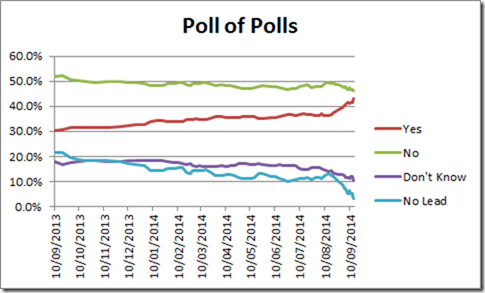 Currently the NO lead in the PoP is in free-fall. Almost every new poll is driving it lower and it is currently sitting at 3.5% after the weekend polls.  (Interestingly if you exclude the Ipsos MORI poll from early August the PoP across the other 6 pollsters shows a No lead of only 1.5%.)

The next interesting piece of data is what has happened to Don’t Knows.

Despite all the comments at the time about Don’t Knows making their minds up in the earlier part of the campaign the DK as measured by the PoP was remarkably stable at 17% (+/- 1%) from September 2013 right through until Feb 2104. It then dropped into the range 16% (+/- 1%) where it sat right through until August. Since then the DK number has been falling steadily and now sits at around 10.5%.

All of this reduction in headline DK has moved to Yes (of course there will be considerable churn under the surface with N to DK and DK to Y taking place).

This pattern continuing would see a further boost to Yes as the final DKs make up their minds.
The other interesting piece of evidence that supports this picture is the trend in the NO vote in the PoP. This was sitting at 51% in the PoP back in Sept 2013, but hasn’t been above 50% in any PoP since mid Oct 2013. Over that period it has gently drifted down and currently sits at 46.4%. Even allowing for the fact that the winning post might not be 50% (assuming not all DKs vote in the end) NO has to see a reverse in this long term trend to prevent being pipped at the post. 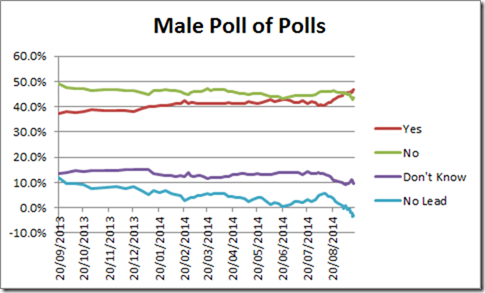 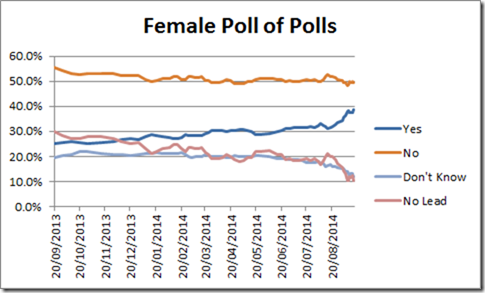 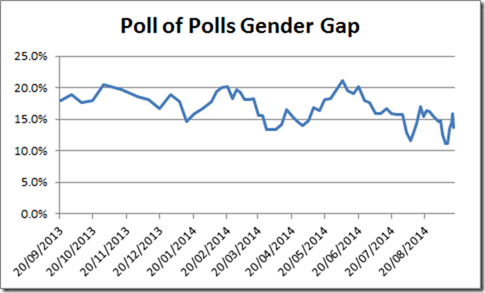 Perhaps the most interesting piece of the jigsaw. As we all know there has been a significant gap in voting intentions between the genders through the campaign. Analysing the separate Poll of Polls calculated for Male and Female voters shows the following :

• The gender gap in the PoP has closed, but not significantly. Female voters were 19% more NO than males in the autumn of 2013, that gap is now sitting at around 14%.

• The % of undecideds among female voters has always been higher than amongst males. Female DK in the PoP was at around 21% in autumn 2013 and has now fallen to around 12% (compared to male DK which has fallen from 14% to around 9% over the same period).

• The PoP for the male data set now shows Yes in the lead by 3.3%, while for females No is in the lead by 10.4%. There was a theory that the gender gap would close as we neared polling day (I believe there is some evidence that a 19% gender gap closed to a 3% gap by polling day in 2011). This may happen this time, and if it does then we are looking at a comfortable Yes victory on Thursday. It may be the case however that the gender gap persists (although at a reduced level) right through until Thursday.

• The other point to consider of course is the impact of the age demographic on the gender gap. There is a huge discrepancy between voting patterns of over 60s (very heavily No) and under 60s (Yes lead in most polls now). The fact that there are more female voters in the over 60 age cohort than males may have an impact that flows through to the overall gender gap. I haven’t quantified this but would be surprised if it is more than 2 – 3%.
Email ThisBlogThis!Share to TwitterShare to FacebookShare to Pinterest
Posted by James Kelly at 6:16 PM