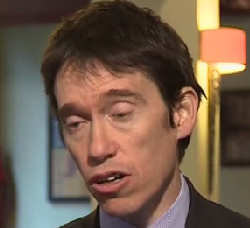 You've really got to hand it to Rory Stewart, the half-Scottish Tory MP for Penrith.  There aren't many 41-year-olds from these parts who can honestly claim to have served as the colonial Deputy Governor of a conquered Middle Eastern country (no wonder he thinks the union is such a spiffing idea), but his real flash of genius was to invent a fantasy kingdom ("the Middleland"), complete with its own 'lore' and made-up history, and then persuade the BBC to produce a glossy dramatisation within a matter of months.  How does the guy do it?  The Lord of the Rings trilogy may have eventually made to it the big screen, but not until 28 years after Tolkien's death.  Elves and orcs of many worlds salute you, Rory.  And so does Aslan.

Anyone who watched Peter MacMahon's Representing Border show last night was in for an unexpected treat, because for some bizarre reason the anti-independence campaign decided to put up "Rory the Tory" as their right-of-reply option for the package about Alex Salmond's St George's Day speech.  When he first appeared on screen, I thought to myself, "surely we're not going to hear any more about Better Together's answer to Narnia, that really would be too much to hope for so soon after we were all spoiled with the epic BBC production".  But it seems that when interviews are conducted right in the heart of the magical realm of "the Middleland" (ie. Carlisle), dreams just can't help themselves from coming true...

"We were in fact, for 700 years, a single unit.  The Middle of Britain was different to the south of England or the north of Scotland.  That's why reintroducing the border would be a tragedy, because people in Newcastle have far more in common with people in Edinburgh than they do with people in London, or people in Edinburgh do with people in Inverness.  I believe REALLY strongly that we have SO much in common.  We speak the same language!   The Scotch that's spoken in southern Scotland, the English that's spoken in northern England, it's...it's...THE SAME WORDS!"

Crikey.  There can't be many languages which lead people to actually use the same words.  You've hooked me on this Middleland magic, Rory - do please go on.

"We've got exactly the same type of economy, we have the same sheep on our hills.  We move back and forth, we have a very similar landscape."

Yup, that was pretty much the strictly non-political message of Tory Rory's two-part BBC 'documentary' Border Country : The Story of Britain's Lost Middleland, which was entirely coincidentally aired in a prime-time slot just six months before the date of the independence referendum.  In case you're wondering how in God's name the story of a wholly fictional land (even the name was Rory's invention) came to be produced by the 'factual' arm of the BBC, apparently they thought it would be OK just so long as Rory was forced to drop in occasional disclaimers such as "I like to call it the Middleland", and "many scholars disagree with me, but..."  The latter seemed to be Rory-speak for "no-one apart from me actually believes this".

In case you missed it, the central idea of the "Middleland" campaign video (sorry, educational history show) was that Britain existed as a single harmonious island nation, until the bastard Romans came along and split us in two, thus giving rise to the concepts of England and Scotland.  I was actually fairly open-minded about this idea, because of course all nations have their origins somewhere in history, and intuitively it seems entirely plausible that a distinctive Scottish culture may have come about as the serendipitous by-product of a foreign occupation.  But the bizarre thing is that Rory used up most of his precious minutes of propaganda airtime seemingly trying to disprove his own theory.  It appears the Romans needn't even have bothered, because as soon as they left a united and indescribably wonderful "Middleland" culture immediately sprang up on both sides of Hadrian's Wall.  It was only several centuries later that the south of Middle-Earth (sorry, "the Middleland") was gobbled up by the Anglo-Saxon kingdom of Wessex, and the north of Fantasia (sorry, "the Middleland") was gobbled up by the mongrel kingdom of Scotland.

So where exactly do the Romans even come into this?  It seems like the modern border is just the point where two conquering armies happened to collide with each other, several centuries after Hadrian's Wall was abandoned.  The Angles and Saxons on one side of the divide hadn't even set foot on British soil at the time when the wall was an actual frontier.  But in an unconvincing attempt to hint at a non-specific causative link, Rory waffled about how the border was set "just a few miles north of Hadrian's Wall".  Well, yeah, if you call 60 miles on the eastern side "just a few miles".  The most terrifying thing about the programme was the creeping realisation that when Rory links hands with "one hundred thousand" members of his local Conservative association on Hadrian's Wall later this year, he actually will think that he's more or less doing it on the real English-Scottish border.  The "hands across the border" thing isn't just a figure of speech as far as he's concerned.

When Rory wasn't berating the Romans for splitting one country that nature intended to be indivisible into two, he was moaning about the fact that there should actually have been three countries (England, Scotland and "the Middleland") rather than just two.  Er, has he never heard of Wales?  The irony is that the Celtic cultures of Wales and Cornwall are the remnants of Rory's beloved pre-Roman unified nation of Britain.  The Brythonic-speaking peoples who ended up confined to those regions were displaced from the rest of the island by the invading English - who of course had still been residents of Denmark and northern Germany at the time of the Roman departure from Britain.  As for the Scots, the basis of our non-Brythonic culture was the conquest from the west by Gaelic-speakers.  It used to be assumed that those invaders were Irish in origin if you go back far enough, but the modern school of thought is that Gaelic was spoken in a small portion of western Scotland for just as long as it was spoken in Ireland.  That seemingly unlikely situation came about because the west was cut off from the rest of the country due to the challenging terrain, but had easy links to Ireland via the sea.  Rory started his programme by suggesting that Britain's natural borders in Roman times were the sea, but that couldn't be more wrong - in those days the sea was a highway that enabled cultural and linguistic closeness, and the hills were a natural frontier that fostered cultural and linguistic separateness.  It was the hills that created Scotland, not a Roman wall.

The supreme comedy moment of the show was when Rory visited a churchyard somewhere in "the Middleland", and pointed towards a Viking grave.  "This is the kind of thing you'd just never see in the south of England or the north of Scotland," he told us breathlessly.  Yeah, because as we all know, not a single Viking ever set foot in Orkney, or Sutherland, or the Western Isles.
Email ThisBlogThis!Share to TwitterShare to FacebookShare to Pinterest
Posted by James Kelly at 4:10 AM