WINGS-WATCH: Campbell appears to want someone in Ohio to be executed, he also wants Kezia Dugdale to "die down a well", and can anyone introduce me to his "fifty employees"?

Stuart Campbell of the formerly pro-independence site Wings Over Scotland (those were the days, eh?) has stayed off the subject of opinion polling for a little while, hence there hasn't been any need for a recent Wings-Watch update to correct his regular factual inaccuracies.  However, I think the time has now come for a little round-up of some of his other...well, let's euphemistically call them "excesses".

Firstly, I was astounded to see him approvingly retweeting two tweets that pretty unambiguously call for prisoners in America to be put to death. 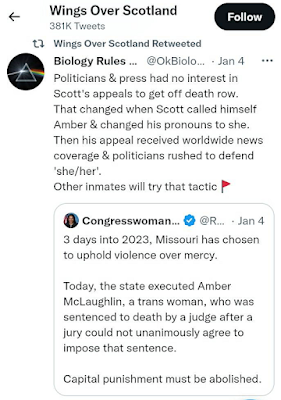 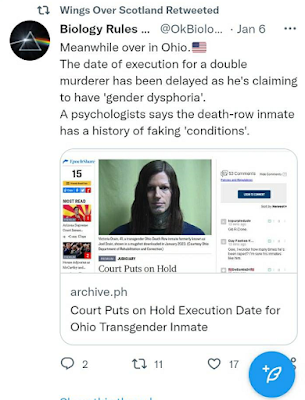 Yeah, let's make sure "tactics" don't prevent the state from killing people, right?  Heaven forbid that the killing process should be impeded by "delays".

As you know, there is a degree of overlap between Campbell's views on the gender identity issue and my own, but he's become so totally consumed by the issue that I'm not sure he even notices anymore when it leads him to show his true colours on other subjects.  It may not be entirely a coincidence that he ended a blogpost yesterday by saying he wants the former leader of the Scottish Labour Party, Kezia Dugdale (who coincidentally defeated him in court on a defamation case and who he's had an unhinged personal vendetta against ever since) to "f*** off and die down a well".  It's not clear whether or not this would also be a form of capital punishment.  And there may be a bit of a recurring theme here, because only a few months ago he used a blogpost to describe an individual as "mercifully deceased".

Could I just say something at this point to members of my own party, including senior members.  I know many of you are admirers of Campbell - I find that inexplicable given his disgraceful behaviour in recent years, but I don't doubt your sincerity.  However, I'd gently suggest that there needs to be a bit of thought about the unqualified public adulation that goes on, because if Alba starts to look like a de facto Wings Party (and speaking personally I would never have joined in a million years if I had thought that was the likely destination), there will be a heavy price to pay.  The reputation of the party will be severely damaged by association.  Even for a small party that is still trying to build its profile and thus doesn't run away from controversy in the way a larger party might, I'm not sure that's a price worth paying.

Yesterday was the day that Campbell seems to live for, because it was the day each month when his most favourite wildly inaccurate "traffic comparison site" updates its figures.  I was a bit puzzled that we didn't see the seventy-ninth appearance of his customary excited blogpost declaring his own site to be the only pro-indy site in the universe that anyone ever reads.  It usually appears within literally minutes of the SimilarWeb update.  However, I swiftly solved the mystery - it turns out that Campbell did his monthly gloat on Twitter instead.

I actually burst out laughing yesterday when I saw SimilarWeb's figures for Scot Goes Pop, which seem to be becoming more and more divorced from reality with each passing month.  Here from the Blogger platform is a graph of the real trend of traffic to this blog during 2022.  As you can see, traffic was higher in November and December than at any previous time in the year, leaving aside a couple of brief spikes caused by individual posts going viral.  (The graph is based on page views, which is a bit of a crude measure, but nevertheless it gives a decent guide to the trend.)  This is exactly what you'd expect, because I was posting on a daily basis during most of November and December, and I was covering a lot of dramatic polls.

And yet if you believed SimilarWeb, you'd think traffic has been dropping like a stone over recent months, and is now roughly half of what it was in July and August - months when I was barely posting, partly due to being on holiday.  SimilarWeb's latest fictitious version of Scot Goes Pop's traffic for December is the lowest I've seen to date, and suggests that Scot Goes Pop now has roughly one-fiftieth of Wings Over Scotland's traffic.  Frankly, if you believe that, you'll believe anything.  Nevertheless, many Wings readers will indeed believe anything Campbell tells them, so let me just pose a couple of awkward little questions.  You see, SimilarWeb doesn't just claim to estimate a website's traffic - it also estimates the site's number of employees and revenue levels.  Here are its current estimates for Wings Over Scotland... 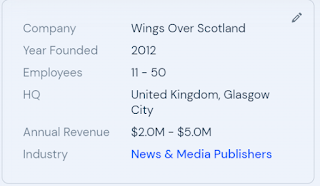 So who are these eleven to fifty reclusive "employees of Wings Over Scotland"?  I mean, we know beyond a shadow of a doubt that they must definitely exist, because Campbell assures us that SimilarWeb's estimates are 100% accurate and reliable.  Does anyone know their names?  What their job titles and duties are?  What is their salary level?  Have they ever been interviewed?

And annual revenues of between two million and five million US dollars.  Gosh, isn't Stu doing well for himself these days?  Almost a bit of a mystery that a millionaire like him would still need to fundraise, but I dare say there must be some sort of logical explanation.

Oh, and he seems to be based in Glasgow, as opposed to somewhere like, let's say, Bath.  That must be completely true as well, because SimilarWeb are of course right about everything.  Strange that Campbell has kept up the Bath fib all these years, but ours not to reason why and all that.

Back in the real world, why are SimilarWeb getting it so hopelessly wrong?  They appear to rely on a panel system, which probably works well enough for extremely large sites like the BBC and the Daily Mail, but for smaller sites like Wings Over Scotland and Scot Goes Pop it's bound to lead to massive inaccuracies, because one or two panellists randomly visiting or not visiting in any given month could be extrapolated to count as literally thousands of people.  The estimates are also for visits as opposed to visitors, which slants the results for a site such as Wings that functions like a chat forum, with the same people constantly going back to check if there have been more comments posted.  And as for why SimilarWeb are so utterly convinced that Campbell is a multi-millionaire with up to several dozen paid minions, well, answers on a postcard, folks. 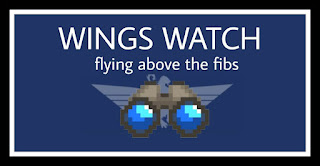 Email ThisBlogThis!Share to TwitterShare to FacebookShare to Pinterest
Posted by James Kelly at 10:45 PM