Time for the Bells? 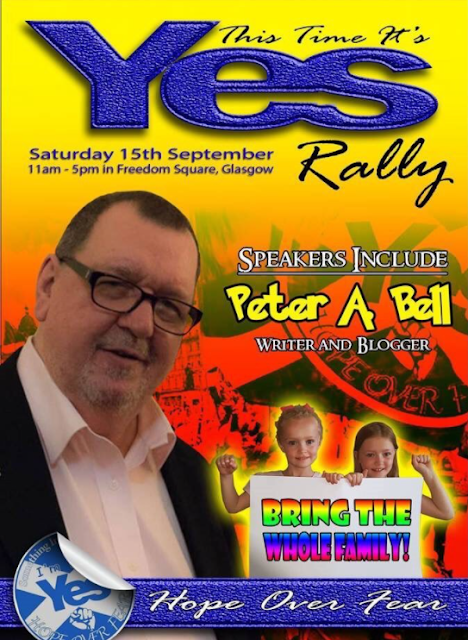 Peter A Bell is justly recognised as a national treasure - and a firm favourite with the kids, as you can see from the classic poster above.  It's always a very special treat when he sends me a novel-length diatribe and then "warns" me that he will be publishing it on Facebook or on his blog as a "precaution" just in case I "censor" him.  That's the type of fearsome threat that makes empires shudder.  Let's face it: the union is as good as dissolved.
I don't know if anyone else has this problem with Peter, but I find his prose very difficult to read.  That's not a problem I've ever had in the disputes with Jeggit or Stuart Campbell, both of whom are very readable even when they're saying things that don't really stack up.  But with Peter, it's often so hard to work out what he's actually angry about, or why anyone should care that he's angry, that I end up having to take a rest every couple of sentences, which means that I sometimes don't even finish reading his comment or post.  In all honesty, that was something I was conscious of even when I was still on good terms with him a few years ago.
So instead of torturing myself by attempting a line by line response to his latest "constructive contribution to the debate", I'll just make a few general remarks about Peter's current idiosyncratic positioning in opposition to both the SNP and Alba, which drives pretty much all of his furious missives these days.  The problem in a nutshell is this: he imagines himself as somehow equidistant between the SNP and Alba, and thinks he can act as a 'bridge' between members of the two parties, but in reality he's significantly further away from the SNP than Alba are.  Alba's route-map to independence is much more radical than what the SNP propose, but Peter's belief in a unilateral declaration of independence is much more radical still.  And yet he thinks the problem can all be sorted out by Alba accepting that the SNP are the only possible vehicle for achieving independence, and the SNP leadership in turn accepting that Peter has been right all along about UDI - something which is of course light-years away from what they would ever accept.  As with the embarrassing #Referendum2018 episode, he feels sure that the SNP could be just a little push away from seeing the light, whereas they actually look upon him and his views as totally batty, and would be far less likely to listen to him than they would to even Alba politicians.
It's precisely because the SNP are not open to alternative ideas on achieving an independence mandate that Alba was formed - and yes, because of the party's current position in the polls, it's going to take an awful lot of hard work to gain traction and achieve our objectives.  But the solution is to get stuck in and actually do that hard work.  It's not to delude ourselves into believing that there's an easy silver bullet available if Peter A Bell can just have a stern word with Nicola Sturgeon.
*  *  *
Barring something unexpected, this will be the last Scot Goes Pop blogpost of 2021. It's been another epic year for the blog: we've commissioned no fewer than three full-scale opinion polls, and produced fourteen podcasts with well-known guests such as Alex Salmond, Chris McEleny and Yvonne Ridley.  If you'd like more of the same in 2022, donations are still very much welcome at the fundraiser page HERE.  Or, if you prefer, you can donate direct via Paypal.  My Paypal email address is:  jkellysta@yahoo.co.uk
Email ThisBlogThis!Share to TwitterShare to FacebookShare to Pinterest
Posted by James Kelly at 3:35 AM