Those of you on Twitter are probably well aware that there's a Herald journalist called David Leask who is notorious for being the least tolerant person you could ever encounter.  It's almost comical - he's literally blocked every single person who's ever interacted with him unless they've unreservedly agreed with his own worldview in each and every microscopic particular.  He has no self-awareness at all about how this behaviour reveals him to have a sinister, mildly fascist mindset (I use the word 'fascist' advisedly - defined in part as 'no tolerance for opposing opinions') and indeed he advertises what he is doing quite openly - after most blockings he 'names and shames' the offending person and states his 'reason' for blocking, which in most cases is silly beyond all belief.  He carries on doing this without any understanding of the immense harm he's doing to his own reputation - and by extension to the reputation of his profession - because, you've guessed it, he's already blocked anyone who is capable of being a candid friend to him and taking him to one side.

Over the years I've been on Twitter, I've watched in genuine astonishment as practically everyone I know, across all shades of pro-independence opinion, has been blocked by Leask, often after interacting with him very respectfully on just one single occasion.  Being aware of his antics, I began to regard it as a game to see if I could end up as just about the only non-sycophant left that he hasn't blocked, simply by permanently ignoring him.  However, over the last few days he has lost the plot even by his own high standards.  Because of his hardline views about Russian-funded media in the UK, he's taken to declaring that anyone who defends Alex Salmond's association with RT cannot by definition be part of the 'real SNP' or share the values of the 'real independence movement' (a jaw-dropping piece of conceit given that Leask is not actually in the indy camp).  This naturally means that Salmond himself, the man who led the Yes campaign in the indyref and has been leader of the SNP for almost one-quarter of its entire existence, is not 'real SNP' or 'real pro-indy'.  I'd humbly submit that is quite possibly the most embarrassing argument ever put forward by any professional journalist who does not work for the Express. 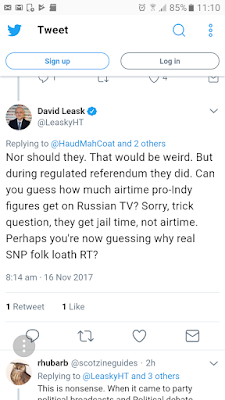 So I finally cracked.  I decided a more interesting game than ignoring Leask would be to see if I could gently challenge him by making a point that is practically irrefutable, and come away without being blocked.  The result, I'm afraid, was all too predictable. 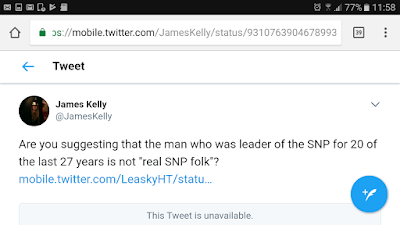 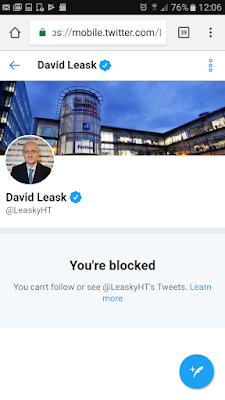 Remember that the above tweet is the only time, in eight years as a Twitter user, that I've ever interacted with the guy.

Try the game yourself.  Go on, it's fun.  Say to him: "It's Thursday, David", and ten seconds later he'll publicly execute you with the words "Blocked for denying it's always Wednesday".

Ladies and gentlemen, I give to you the one and only Mr David Leask.


Email ThisBlogThis!Share to TwitterShare to FacebookShare to Pinterest
Posted by James Kelly at 12:20 PM