If you're a nationalist and are considering assisting Labour Hame with one of their 'questions' in future, you need to read this... 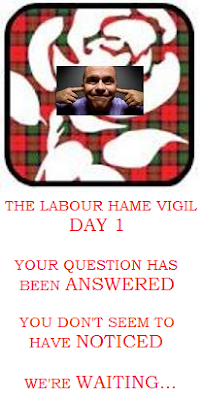 If you haven't been following my recent exchange with the Labour Hame duty officer on Twitter, this might be a useful moment to recap.  The story begins on the 24th of July when the tartan-clad Website of the People posed the latest in its series of 'fiendishly difficult' questions for nationalists -

Should California secede from the Union, and are those Californians who wish to remain American guilty of being “anti-Californian”?

Several highly pertinent and well-argued responses from nationalists were swiftly received, for the most part noting that it is entirely a matter for the Californian people to decide, and that there are in any case a number of huge differences between California and Scotland (cultural, historical, constitutional) that render such a comparison meaningless. Curiously, though, on Sunday, the admin of Labour Hame claimed that the question was still - like all the others before it - 'UNANSWERED'. So I posed an obvious question of my own, both here and on Twitter, leading to a little exchange that has been going on for a couple of days...

Me : What would it actually take to get @LabourHame to acknowledge that one of their questions has been answered?

Labour Hame : How about when it's answered? Or is that too complicated for you?

Me : Not at all, that's grand. In that case, can you explain in what sense the seven answers I quoted were not in fact answers?

Me : Yes, my own was. As you'd know if you'd followed the link in the tweet you were replying to.

(I then once again directed him to a post that repeated my own answer to the question : "yes, if it wants to, but not if it doesn't" to the first part of the question, and "no" to the second part.)

Me : So I take it we can now formally certify that question as 'ANSWERED'? If not, what's your latest excuse?

Labour Hame : Sorry, that doesn't qualify. Either "yes" or "no" is acceptable - no qualifications. Try again.

(Unwittingly, this was a very helpful response, because for the first time ever he had set out his specifications for what constituted a valid answer. Those specifications may have been monumentally silly, but they were extremely easy to satisfy, and it would be impossible for him to pretend later on that he hadn't set them. Or so you'd think.)

(I then directed him to a fresh post stating that my answer to the first part of the question was 'no', on the grounds that the constitutional future of California was entirely a matter for the Californian people to decide, and that there was ample evidence that they have absolutely no interest in independence whatsoever - in stark contrast to the people of Scotland. My answer to the second part of the question remained 'no'.)

Me : So is the question 'ANSWERED' now?

Labour Hame : Okay, here's a clue: the correct answer is the same answer to "Should Scotland secede from the UK?" Try one more time.

Me : And I quote - "Either 'yes' or 'no' is acceptable". My answer was "no". Kindly explain why you've just contradicted yourself?

You won't be surprised to hear that my last question remains...how can I put this...UNANSWERED, in spite of the fact that there have been a couple of tweets from Labour Hame's duty officer on Twitter since I posted it. You can rest assured that I'll be pressing him on the matter if I hear nothing soon. Perhaps the answer is "Er..."?

I'd suggest this is a valuable lesson for any future question from the admin of Labour Hame - even if you answer it in precisely the way he claims he wants you to answer it, that still won't constitute an answer. And perhaps the next time we ask "why wasn't that an answer?", the response will be "because you're a nationalist, and I've just discovered a new law of physics that renders it impossible for nationalists to answer any question to my satisfaction".
Email ThisBlogThis!Share to TwitterShare to FacebookShare to Pinterest
Posted by James Kelly at 4:57 PM

Labels: politics, questions to which the answer is la la la la I'm not listening