Nick Robinson: you don't even have to set traps for him 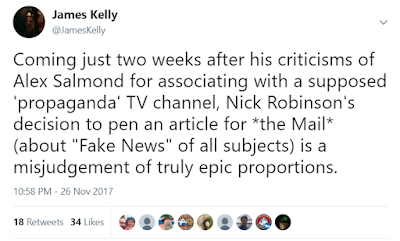 The myriad of ways in which BBC Today presenter Nick Robinson has just mutilated his own credibility by writing an article for the Mail on Sunday are so obvious that they barely need to be stated, but let's just run through some of them anyway.

* Two weeks ago, Robinson argued that the problem with The Alex Salmond Show was not that the programme itself would contain "Kremlin propaganda", but rather that it would lend credibility to the propaganda found elsewhere on the RT channel.  It's therefore reasonable to conclude that Robinson always pauses to think deeply about the credibility he might be lending to the output of any media organisation he associates with, and that he's decided he's more than happy to give his personal stamp of approval to the Mail's demonisation of immigrants, relentless body-shaming of women, and sexualisation of girls under the age of consent (among the many other delightful things we know and love about that publication).  At the very least, it's clear that he simply doesn't think these things are important enough to compel him to withhold credibility from them.

* It's a statement of the obvious that the Mail has a political agenda, and tries to shape the news as much as report it.  If Robinson thinks a politician should have nothing to do with a propaganda media outlet, what does it say about him as a public service broadcaster with a duty of complete impartiality that he has freely chosen to associate with the right-wing, British nationalist political platform of the Mail?

* In contrast to Alex Salmond, who has total editorial control over his RT programme, it's clear that Robinson was content to cede a degree of editorial control over the presentation of his article to the Mail.  Indeed, it's pretty much impossible to write a newspaper article without doing that.   The Mail have taken advantage of that with, for example, a strategically-placed and carefully captioned photo of Alex Salmond that emphasises the ways in which Robinson's piece is in tune with the newspaper's own familiar anti-SNP (and indeed anti-Scottish) propaganda.  It's tantamount to saying "You see?  It's not just us.  The neutral BBC think it as well."  Robinson has given them full licence to use his status for their own ends.

* Much of Robinson's article relies on innuendo rather than fact, which is something he would never tolerate in respect of criticisms of either himself or the BBC.  For instance, he thinks it's enough to simply pose the question: why did Radio Sputnik set up a base in Edinburgh of all places?  Well, there could be many possible answers to that question, only one of which is "because breaking up the United Kingdom is a clearly-defined and overriding objective of Russian-funded broadcasting".  An alternative explanation is that Radio Sputnik and RT are both seeking niche ways of expanding their reach in a crowded market, and have identified the energy of the pro-independence alternative media in Scotland as an obvious gap in that market.  (Ironically, they wouldn't even have had the opportunity if it hadn't been for the failure of the BBC and the rest of the mainstream media to give the pro-independence side a fair crack of the whip.)  By the same token, there are many possible answers to the question: "what can we read into an extraordinarily misleading report by Nick Robinson on prime-time BBC News just before the indyref claiming that Alex Salmond didn't answer a question that he clearly did answer, and at great length?"  It's not compulsory to jump to the conspiracy theory conclusion, and Robinson clearly finds it offensive when people do.  If he wants them to stop, I'd suggest he should practice what he preaches.

* Two months ago, Robinson used his Reith Lecture to argue that the BBC needed to combat a loss of trust on social media by advertising its own impartiality proudly.  So does he really think a BBC presenter siding with a right-wing British nationalist newspaper against Alex Salmond, and doing so in the most brazenly hypocritical way imaginable, will help to win back that trust on social media?  Or will it, just conceivably, cause people to fall about laughing?  Or, indeed, to become extremely angry, because it confirms all of their worst fears?  Answers on a postcard, folks...
Email ThisBlogThis!Share to TwitterShare to FacebookShare to Pinterest
Posted by James Kelly at 12:14 AM