Bella's Shame : The disturbing use of Trump-style "alternative facts" by the RISE/Green-supporting new media

From what I can gather, the Bella Caledonia editorial team still very much preach the gospel of "solidarity" between Yessers - which, as many of us have learnt the hard way, roughly translates as "when we criticise you, we're teachers, but when you criticise us, you're immature dividers".  I was treated to another depressing (and frankly quite upsetting) example of that maxim last night.  I had just settled down to enjoy a relaxing Sunday evening at Celtic Connections, when I made the schoolboy error of checking my phone.  What you're about to see was what was waiting for me on Twitter from the deputy editor of Bella - a man who I can't recall even mentioning, let alone having had any contact with, for several months.  I've got to tell you, Mr Williamson, that I'm not sensing much "solidarity", "respect" or "tolerance" in this little lot. 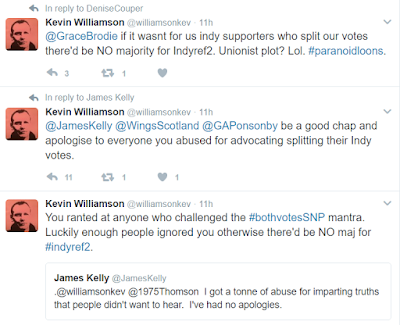 As regular readers know, I'm not someone who uses the word "lie" with abandon, but I have to say I don't see how I can avoid it in this particular case.  (Although as we're now in the era of the "alternative fact", perhaps we do have a charitable euphemism that would fit.)  Mr Williamson's basic claim - that there wouldn't now be a majority for an independence referendum if some SNP supporters hadn't "tactically" switched to the Greens on the list ballot - is not merely misleading, it's a downright lie.  It's a claim that's not even supported by the Sunday Herald article he prays in aid, which in spite of being drenched in highly misleading spin, goes no further than to suggest that less tactical voting might have resulted in two more SNP seats, and four fewer Green seats.  You won't need to consult an abacus to work out that this means that even the Sunday Herald are admitting there would have been a pro-independence majority with or without tactical voting.  Perhaps more to the point, they're also tacitly admitting that the SNP would have retained their overall majority if tactical voting hadn't occurred - because, of course, two extra SNP seats would have been sufficient to take the party to the magic number of 65.

What is most disgraceful about Kevin's rant is not the outrageous and totally unfounded allegation that I was "abusive" towards tactical voting supporters.  It's not the way he deliberately misrepresents my position on so-called tactical voting on the list, or even the way he deliberately misrepresents the Sunday Herald article.  No, it's the way he tries to rewrite history about his own position during the election campaign - because back then he was never even talking about a situation in which it was assumed that the SNP might lose their majority, and tactical votes on the list might somehow help to salvage a joint SNP/Green majority.  He was doing the polar opposite of that - he was saying that it was absolutely 100% certain that the SNP would win a majority on constituency seats alone, and he was pouring extreme mockery and scorn on anyone who dared to question that self-evidently ludicrous claim.  (How he has the nerve to accuse his critics of "abuse" after his own antics during the campaign is, to say the least, somewhat hard to understand.)  I think probably the simplest way of illustrating this point is to re-post an exchange I had with him in August 2015.  I defy anyone to read the following and conclude that this is a guy who has a leg to stand on.

Me : "All over the place"? Do you mean I've contradicted myself? In what sense?

Me : Exactly, I've consistently argued against that notion. How is that "all over the place"?

Kevin Williamson : because to argue against it is to deny the reality of consistently good opinion polls for SNP now at 62%

Me : Ah, now we're getting somewhere. The opinion polls are NOT showing the SNP consistently on 62%. Panelbase say 53%.

Kevin Williamson : almost every non partisan pundit forecasting SNP winning almost all of the Holyrood Constituency seats in 2016. Why not you?

Me : Not good enough, Kevin, justify that. Who are these pundits and when did they say it?

Kevin Williamson : I'm beginning to think you're either not paying attention to Scottish politics or in denial to make a party political point

Me : For clarity, have you ignored my question because you're unable to answer it, or for another reason?

Kevin Williamson : okay lets clarify things. How many Constituency seats do you think SNP are on course to win? Give us a ballpark figure?

Me : They are not "on course" for any particular figure. There is a 9% divergence between the pollsters, with NINE MONTHS to go!

Me : By the way, I'm still waiting to hear who these "non-partisan pundits" are.

Kevin Williamson : come on James! Is that the best analysis we're going to get from you on Scot Goes Pop? "Mibbes aye mibbes naw"

Me : This is pathetic, Kevin. Give me the names of the pundits you've cited, and direct me to what they've said.

Kevin Williamson : google the articles in wake of last couple of polls James. There are NONE suggesting SNP arent on course to sweep Constit seats.

Me : If it's that easy, you should be able to give me a couple of names so I know who you mean?

Kevin Williamson : An opinion poll analyst who refuses to project no. seats from opinion polls? Heard it all now. What you afraid of?

Me : Woah, woah, woah. What does "project" mean? You do know that opinion polls are snapshots not predictions? Perhaps you don't.

Kevin Williamson : You're just being pedantic. Every month Scot Goes Pop refuses to project no. of SNP seats its credibility will sink.

Me : If helping people understand the limitations of opinion polls will somehow harm my credibility, I'll have to live with that.

So let's sum up.  Here we have a chap who screamed blue bloody murder at me because I refused - supposedly for reasons of blind partisanship - to forecast that the SNP would take circa 62% of the constituency vote (they actually took only 46.5%), and that they would win almost every single constituency seat (they actually failed to win FOURTEEN constituency seats).  I don't think it's unreasonable or arrogant of me to point out that my determination to be more circumspect than he demanded was 100% vindicated in every respect.  I couldn't predict the election result, and that was the whole point - nobody could, and he certainly couldn't.  But having got everything so completely, hopelessly, cluelessly wrong, he now demands that I should apologise to him.  If it wasn't so offensive, it would actually be very, very funny.

It's difficult to say too much about the John Curtice report that the Sunday Herald article refers to, because it apparently hasn't even been published yet.  Most pertinently, it's unclear whether the report uses survey evidence to positively identify which votes were genuinely intended "tactically", or whether it just plays around with various electoral permutations and makes educated guesses about "tactical" intent.  But even if we assume for the sake of argument (and I do stress that it's a highly questionable assumption) that the effect of tactical voting was exactly as Curtice is apparently saying it was (ie. a net loss of two SNP seats and a net gain of four Green seats), then what that would mean, without even a shadow of doubt, is that tactical voting comprehensively backfired as far as SNP supporters are concerned.  Without it, there would have been a pro-independence majority and an outright SNP majority.  As it is, there is a pro-independence majority, but no outright SNP majority.  There is no planet on which that can be considered anything other than a worse outcome from an SNP supporter's point of view.  A couple of extra pro-indy seats is not compensation for the loss of the SNP majority, because there is nothing we can do with 69 pro-indy seats that we couldn't have done with 67 - but as we've been reminded in recent days, there's a hell of a lot we could have done with 65 SNP seats that we can't do with only 63.  Perhaps most importantly of all, retaining an outright SNP majority would have saved us from the gloating of the unionist media last May, which for a while threatened a decisive shift in the prevailing political "narrative".  In a perverse way, we should count ourselves extremely lucky that the events of the EU referendum campaign promptly reversed the loss of momentum the independence movement had only just suffered as a result of the tactical voting debacle.

By the way, contrary to Kevin's desperate rewriting of history, I never, ever claimed that attempts at tactical voting would definitely have a negative effect.  I always acknowledged the possibility that it could have a positive outcome - but I noted that if it did so, that would happen as a result of complete chance, and not as a result of sound strategy.  The caution I gave to people was that what they thought was "tactical voting" was in fact "gambling voting" - you just couldn't tell whether you would get the result you intended, or whether it would blow up in your face.  In this particular instance, the latter happened.  And yet the siren voices who led SNP supporters onto the rocks are now claiming "vindication".  It is quite simply extraordinary - but in the new Orwellian era of Trump, Spicer and Bannon, perhaps we shouldn't be shocked by anything.

You might be wondering whether the Sunday Herald are as guilty of misrepresentation as Kevin Williamson himself is.  As I've already noted, their article is drenched in misleading spin, and frankly that's not at all surprising.  They're obviously trying to cover their embarrassment over their moment of madness last spring when for one weekend only they were taken over lock, stock, and barrel by the Bella-sponsored "tactical voting" propaganda campaign, thus potentially contributing to the loss of the SNP majority.  For the most part, though, the article does just about manage to stay on the right side of factual accuracy.  Unfortunately, the one big exception is the totally inaccurate headline (the only thing that a lot of people will read), which falsely claims that "indy supporters who voted Green did not...harm SNP".  That's directly contradicted by the text of the article itself.  I won't use the word "lie" on this occasion, though - there may be a semi-innocent explanation, such as a sub-editor getting so carried away with the spin in the article that they honestly thought it said something that it didn't.

Final thought : While we're on the subject of undeserved apologies being demanded, it should be pointed out that I was actually promised an apology in advance by someone in the tactical voting lobby - but it never materialised.  The CommonSpace columnist Jonathan Rimmer reacted with apparently genuine astonishment when I predicted (one of the few hard predictions that I did make) that Solidarity would outpoll RISE in Glasgow.  He then spontaneously promised to apologise if I turned out to be right, which he was quite sure I wouldn't.

Actual Glasgow result : Solidarity - 3593 votes, RISE - 2454 votes.  Admittedly a wee bit closer than I was expecting, but I did call it correctly.

In your own time, Jonathan.
Email ThisBlogThis!Share to TwitterShare to FacebookShare to Pinterest
Posted by James Kelly at 5:31 AM