I'm still undecided about whether Word-Search Wednesday will be a regular feature, but after perusing Denis MacShane's Wikipedia biography it was extremely tough to resist this one... 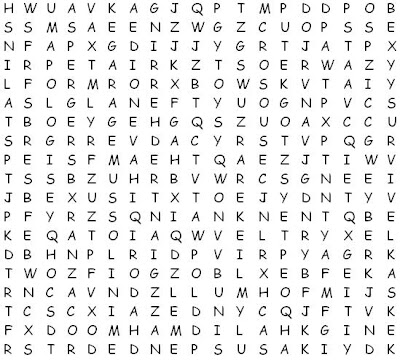 One lesson I learned from the George Foulkes word-search is that these puzzles are much too difficult to solve unless the words to look for are provided, so I'm going to reveal them straight away this time -

Stalin : Denis once pointed out that left-wingers who campaigned against the Iraq War were just like the left-wing apologists for Stalin in the 1930s. Well, someone had to say what everyone else was thinking.

Nicolas Sarkozy : The candidate who Denis, as a well-known socialist, naturally wanted to win the French presidential election of 2007. Apparently Ségolène Royal was anti-Semitic, or something.

José María Aznar : The conservative Spanish Prime Minister who in 2004 appeared set to win the general election. Denis, as a well-known socialist, was naturally delighted, particularly because all those forlorn left-wing hopes that Aznar's support for the unpopular Iraq War might be his downfall were about to be dashed.

José Zapatero : The socialist who won the 2004 Spanish general election, partly because of Aznar's support for the unpopular Iraq War. Denis naturally professed himself delighted - it was what he'd wanted all along.

Khalid Mahmood : In the early days of the Afghanistan War, Denis penned an Observer article entitled 'The Five Myths Muslims Must Deny', but selflessly allowed Muslim MP Khalid Mahmood to take all the credit. It was just a favour for a pal, really - Denis had initially offered to do exactly the same favour for Lord Ahmed, who weirdly couldn't bring himself to accept such generosity.

"Jesus Christ, no" : How Denis responded when asked by the Scotsman if he had described Gordon Brown's famous five economic tests as a giant red herring.

Survive in government : What Denis told the Scotsman would be impossible for anyone to do if they had described Gordon Brown's famous five economic tests as a giant red herring.

It was on tape : The reason we know that Denis did, in fact, describe Gordon Brown's famous five economic tests as a giant red herring.

"I have no idea why I was removed as a a minister" : Denis later candidly confessed that he was clueless as to why he didn't survive in government after describing Gordon Brown's famous five economic tests as a giant red herring.

His garage : The place Denis claimed £125,000 worth of parliamentary expenses for.

Suspended from the Parliamentary Labour Party : What Denis now is as a result of claiming £125,000 worth of parliamentary expenses for his garage.

Asperger's : Gary McKinnon, the man faced with the terrifying prospect of being caged as a "terrorist" in the US for the unspeakable crime of seeking information about UFOs, has this syndrome. Or, at least, that's the official story, but Denis reckons it's all a crafty ruse. What's that? You want evidence that the doctors got it all wrong? I'm appalled. Look no further than Denis' intellect.

Twenty-five thousand : The number of "sex slaves" (trafficked women) Denis claimed the Home Office had estimated were "working in the massage parlours and brothels" of the UK. No such estimate ever existed, and the true figure is likely to be a small fraction of the number Denis quoted.

A different journalism : What Denis suggested should report on prostitution in future, after struggling to answer the impertinent questions asked by journalism in its current form about where the twenty-five thousand figure had come from.

Apologise : What Denis once suggested Ossama el Batran should do for every killing of a Jew by Hamas. El Batran was not a member or supporter of Hamas, but rather an Egyptian postgraduate student at Cambridge University. However, he'd asked Denis a probing question, so deserved nothing less.

Mussolini : The democratically-elected President of Venezuela, Hugo Chavez, was temporarily deposed by a military coup during Denis' fondly-remembered stint as Minister for Europe. Denis shrewdly realised that the best way of helping the situation was to call Chavez a "ranting populist demagogue" and to compare him to Mussolini, along with a strategic pretence that the military men were acting on behalf of "the people". This daring gambit paid off - democracy was restored within days, as Denis later jubilantly confirmed had been his objective all along. A grateful nation subsequently funded a statue of Denis in Caracas by popular subscription.

And that's the lot. I'll try to post the solution to the puzzle over the weekend.
Email ThisBlogThis!Share to TwitterShare to FacebookShare to Pinterest
Posted by James Kelly at 11:05 PM