Click here to go straight to the fundraiser page.

It's that time of the year again when I ask for your help as I continue to write about Scottish politics. If the fundraiser succeeds, the likelihood is that I'll continue to write on this blog, although I always try to keep open a bit of flexibility just in case I end up writing on another website, or perhaps even following the lead of other bloggers by self-publishing a book. (But if my circumstances change completely and I'm unable to continue writing about politics at all, at that stage I would pass the remaining funds on to other pro-indy causes.)

So what is Scot Goes Pop? It's one of the most-read and also one of the oldest pro-independence websites in Scotland. It began way back in 2008, but gained in popularity in 2013 when I launched the Scot Goes Pop Poll of Polls for voting intentions in the independence referendum. I had become quite cynical about the way anti-independence newspapers repeatedly seized on individual No-friendly polls as 'proof' that the campaign was supposedly over before it had even started. The intention was clearly to sap the morale of Yes campaigners. The Poll of Polls was a useful corrective, helping to put unfavourable polls in their proper context by comparing them to the average numbers across all polling firms, and emphasising the high degree of uncertainty about the true state of public opinion.

In the run-up to the 2015 general election, Scot Goes Pop picked up on the extraordinary SNP surge several weeks earlier than the mainstream media, mostly because I wasn't dogmatic enough to ignore the consistent and unambiguous message being sent by the Scottish subsamples of Britain-wide polls. And then as the 2016 Holyrood election approached, I warned that the SNP were in danger of losing their overall majority at a time when other voices were insisting that a majority was a foregone conclusion, and that the SNP didn't need any list votes at all.

With yet another Westminster general election potentially in the offing now, and as preparations continue for a possible second independence referendum, I hope to continue with the blog's unique coverage of the polling situation from a pro-indy perspective. To get a better idea of what Scot Goes Pop is all about, please watch this short promo film that I made with Phantom Power last year.

The latest figures from the Traffic Estimate site suggest that Scot Goes Pop has received 62,200 unique visitors over the last 30 days (as of 31st May 2019), making it the fourth most popular alternative media site in Scotland. Not bad for a one-person operation!

There's often a misconception that the purpose of a fundraiser such as this is to cover "running costs". In fact, there are no running costs for Scot Goes Pop, because it uses a free blogging platform. There are, however, a few miscellaneous (and usually small) expenses that crop up as an indirect result of the blog. To give a couple of examples: last year I was asked to speak at the Hands Off Our Parliament rally at Holyrood, which obviously meant paying a train fare to Edinburgh, and in 2016 I was asked to invest in a decent microphone to improve the sound quality of an Independence Live debate I participated in with Tommy Sheridan. The fundraiser can help cover expenses of that type, but the main purpose is simply to help me keep body and soul together while I'm writing.

I should stress for the benefit of any passing trolls that the fundraisers are not my sole source of income, and I'm relieved to say that I even do some work that has nothing to do with either politics or writing. But long-term readers will know that I post frequently and at length during particularly busy periods, such as general election and referendum campaigns. During those brief spells, the level of commitment required almost approaches that of a full-time job. At other times it can be like a very time-consuming part-time job. I'm also sometimes asked to write articles for other publications - for example, until a year or two back I was a pro-independence columnist for both the International Business Times and the Talk Radio website. Those articles were often requested at extremely short notice and I ended up writing them in a variety of weird and wonderful settings and circumstances. It simply wouldn't be possible to do that if I was also trying to hold down a 9-5 job. The fundraisers give me the flexibility to drop everything and write as and when required (most obviously when an opinion poll is published).

As you may know, there have been other spin-offs from the blog's success. I currently have a monthly column in iScot magazine, and I've also written for publications such as The National, the Sunday National, Fair Observer, National Collective, and even the Eurovision Times! Many of the IBTimes articles were syndicated on Yahoo, sometimes reaching huge audiences. I've been interviewed on BBC Breakfast, BBC Radio 5 Live, CTV News (Canada), the Bauer radio network, Radio Sputnik, and numerous alternative media podcasts, films and live-streams.

As always, please don't feel under any pressure to make a donation. Scot Goes Pop isn't a newspaper or a magazine - it's a blog, and there's absolutely no charge for reading it. The option to donate is there if you want to, but it's only an option. And, of course, if you have a spare minute or two you can always pass on the word to others - every tweet or Facebook share helps enormously! 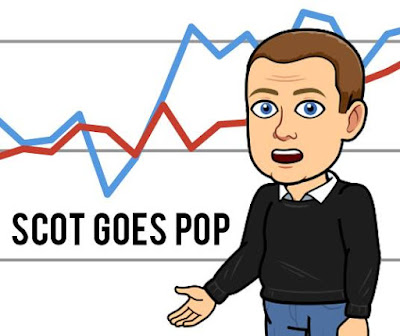 Email ThisBlogThis!Share to TwitterShare to FacebookShare to Pinterest
Posted by James Kelly at 8:10 AM