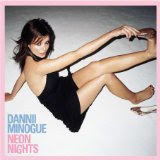 Dannii Minogue will reportedly reveal on Saturday night that the reason she posed nude for a photo-shoot more than a decade ago was that she needed the fee to pay off her £150,000 debts. Her father apparently begged her not to go through with it, saying "doing this is forever - you can never, ever change it". But as it turned out, it's difficult to see that she suffered any long-term cost at all - if I recall correctly, she was even allowed to continue presenting children's programmes afterwards (Janet Ellis must have been...well, bemused). In fact, I think many people would be quite envious that someone had even a theoretical option (however uncomfortable) to get a quick, clean break from such an unimaginable mountain of debt. The only time I've ever been offered anything to take my clothes off was a couple of months ago by this part-time novelist, part-time total nutter. Unfortunately the reward on offer was merely the chance to win back 'five English pounds' from a (in retrospect slightly tasteless) bet that he and others had browbeaten me into accepting. So I wasn't exactly tempted.

It wasn't all bad news, though. You'll probably have noticed the slightly disturbing pose of the aforementioned novelist/nutter in the photo linked to above. Before accepting his original bet, I had challenged him to provide photographic evidence that he was actually good for this 'five English pounds' he claimed to be in possession of. But as you can see, he appears to see no distinction whatsoever between Thai and English currency. So I realised he wouldn't have the slightest objection if I chose to settle the bet by, say, stuffing a load of Croatian kunas into an envelope and sending it off to him. Oh, and a single US dollar bill that I'd had pointlessly lying around the house for years and years and years. Yes, all in all losing that bet was a small but very real blow against the scourge of clutter.
Email ThisBlogThis!Share to TwitterShare to FacebookShare to Pinterest
Posted by James Kelly at 8:58 PM