Slightly caught in a time-warp from last year, I find myself saying again: for one night only, here is the return of a much-missed-by-pretty-much-nobody Scot Goes Pop feature from the past - yes, it's the Edinburgh Fringe mini-reviews!  And it really is for one night only, because I live with a vulnerable person and my former routine of going to the Fringe six or seven times over the course of August is very much on hold for the time being.  Last year I decided to go in just once and I managed to find a couple of shows that were completely outdoors (albeit one of them was cancelled at the very last moment).  So I thought I'd be able to do the same thing again this time - I assumed with the Fringe back to a full programme it wouldn't be beyond the wit of man to find at least a handful of shows that were outside.

How naive of me.  The pandemic "is over", don't-cha-know, everything is "back to normal".  I cast the net pretty wide, I searched for drama, dance, musicals, physical theatre, etc, etc, but after dredging through eighty-odd pages of results, I literally found just two shows that I was confident were fully outdoors.  One of those was Sweet FA, which was the only show I actually managed to see last year (it's a play about women's football during and after the First World War), and the other was an "audio walk" through the streets of Edinburgh as you listen to a pre-recording of a feminist talking about the incel movement, which didn't sound exactly like my cup of tea.  And as good as Sweet FA is, I couldn't quite convince myself that a repeat performance was what I was looking for if I was only going to Edinburgh once.

I almost started to wonder if I should abandon the idea of booking anything and just wander around watching the street theatre instead - but I realised the day would end up a bit too heavily-weighted towards escapology and fire-juggling.  So I decided to just plump for the best fit I could find.

This is Sweet FA's sister show, but is staged differently because there isn't a fixed outdoor stage - instead you're led around various spots within Tynecastle.  I formed the impression from what I read that the bulk of it would be outdoors, and although I was right about that, it was the 25% that's indoors that was the absolute killer.  About one-third of the way through, there's a prolonged sequence in the Hearts dressing room in which the cast of ten are shouting and screaming very close to the audience in an extremely confined space - it's just about the highest risk environment you can possibly imagine from a Covid point of view, and if I'd known it was going to be like that, I wouldn't have gone.  I don't blame the production, because there was nothing inaccurate in the description I read, but I do blame the Fringe centrally for not arming people with enough information.  When you search for shows on the website, you can find out how accessible they are, whether you're likely to find them offensive, exactly how many miles away from you they are, and what the babes-in-arms policy is.  But the one thing you're left totally in the dark about, right in the middle of an ongoing pandemic, is the degree of risk that you'll catch a serious virus while you're at the venue.  The implied message seems to be: the Fringe is only for people who don't care about avoiding Covid, or to put it another way, stop caring about avoiding Covid if you want to come to the Fringe.  In the end I just had to trust in my N95 mask (needless to say I was the only person in the audience wearing a mask indoors), and over a week later, touch wood, it looks like I might have got away with it.

The play itself is about the Hearts team that was on course to win the league at the outbreak of the First World War, but ended up losing out to Celtic after the team joined the army and started to pay the price of military training.  In a far crueller twist, several of the players went on to die together at the Battle of the Somme in 1916.  There isn't an explicit anti-war message in the script, but you're shown the massive external pressure the team were under to join up, from the military, from the press, and from young women delivering white feathers.  And then you're left in little doubt that the players' sacrifice was essentially futile, because it was obvious before the scheduled advance that there was no realistic prospect of success.  Since the purpose of pressuring the team into fighting in the war was to coax Hearts supporters into following their idols' example, you're left wondering how many of those supporters ended up having their lives needlessly thrown away too.

It's an excellent production, although apart from the safety aspect the one thing that bugged me was the anachronism of using what appeared to be radio commentaries to tell the story of the football season in shorthand.  As is being well and truly shoved down our throats, this is the centenary year of the BBC, and although there were amateur radio stations prior to 1922, it seems pretty unlikely that there was such professional-sounding football commentary on the radio as early as 1914.  But I suppose you just have to suspend disbelief.

After a bit of reflection, I decided there was actually something to be said for making a virtue out of necessity by going to one of the extremely unorthodox Fringe productions that I read about every year but wouldn't normally take a punt on.  My main misgiving about this was not actually the subject-matter, but instead that the pre-recorded nature of the monologue about incels meant that I wouldn't even be spending my money on seeing a live production.  However, you're led through the streets by a lone woman, and she stresses before the start that "it only works" if you keep a bit of distance from her, so presumably the visual effect of that is intentional - meaning there's a small element of live performance, albeit of a very basic type.  But what really counterbalances the non-live audio is the very high level of individual interaction with the audience, more so than I've ever experienced at any other Fringe show.  Our guide spoke to most of us individually before the start, and I'm pretty sure she sought every single one of us out after the end.  I was a bit startled when she approached me and asked what I had thought about the way she paced the walk, and also how I had found out about the show.  I said to her: "I know this will sound ridiculous, but I wanted to see something that was mostly outside, I live with a vulnerable person and I didn't want to be stuck inside for two hours".  She said "yes of course!" but then apologised for the fact that she couldn't give me a light, funny show.  I told her that wasn't what I was looking for (and it wasn't), but as a group of Swiss feminists seemed to be behind the production, I think I was just relieved to be able to offer a plausible reason for turning up that had nothing to do with a keen interest in the subject of incels.

The other thing that considerably enhanced the experience was that, just by chance, the world's most enthusiastic audience member was there and talked excitably to our guide in both English and fluent French about how much he was looking forward to the production and how he thought more Fringe shows should try something daring and different.  She warned him that the audio was very dark, but he said "that's great, I like to be challenged!"  When the walk started, he turned to me with a huge grin and said "here we go!" as if we were setting off on a reindeer ride in Lapland.  I did wonder if his attitude might have changed by the end - but not a bit of it.  He said it had been amazing, that the walk had taken him close to where he lived and that he would never see those streets in the same way again.  (Possibly that was overstating the case just slightly.)

I was curious about the back-story of the production, because in spite of the Swiss origin of it, the audio is performed by a Scottish actress, and the script was very obviously written by a native English speaker.  It was presumably an adaptation of the French language original, but even so, it must have taken quite a bit of organising.  Before going, I read a short review in the Guardian, and the main misgiving mentioned was that the incel movement is small in number and thus is not really the chief explanation for women feeling unsafe when they walk the streets alone.  Although it's haunting to observe a lone woman while listening to an account of an extreme misogynist ideology, the fixation of the character delivering the monologue can only be explained as symbolic rather than a concern about something that is particularly likely to affect her directly.

The final flourish at the end of the walk is that you're led back into Summerhall (the room was large and well-ventilated so I can't complain too much) and given a little gift to take home.  I suppose this falls into the category of "spoilers" but suffice to say that part of the gift I received was edible and in a rather startling shape.  I'll be charitable and assume that it's an example of offbeat Swiss humour, because the alternative explanation would be a touch of 'revenge misandry'.

Probably part of the reason I've given the show a high rating is its novelty - if there were lots of audio walks in the Fringe, I've no idea if this would stand out as one of the best.  But it was certainly a memorable experience.  Because it was an exceptionally hot day, I was a bit worried beforehand that I was getting very tired, so in order to be ready for an hour's walk I went to the Meadows with a sandwich and forced myself to just lie there for a good forty minutes.  The irony was that the walk eventually took me back to almost exactly the same spot in the Meadows, where every single person in the audience proceeded to have a lie down!

And just a word about Summerhall: I'd only been there twice before, and one of those times was to attend a presentation by John McTernan.  So, let's face it, the only way was up. 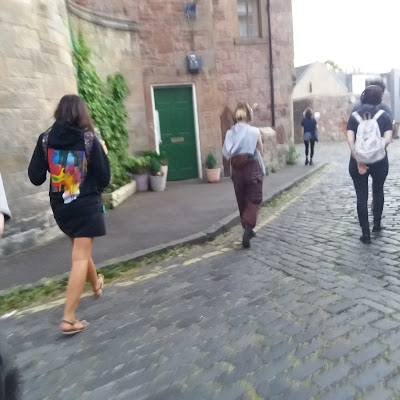 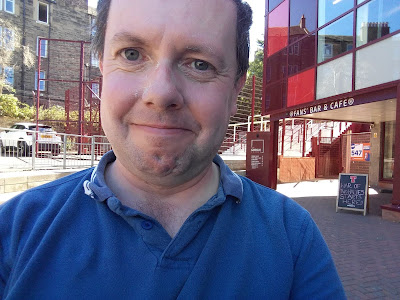 Email ThisBlogThis!Share to TwitterShare to FacebookShare to Pinterest
Posted by James Kelly at 1:57 AM