As promised, here is the solution to Christmas Day's word-search puzzle - 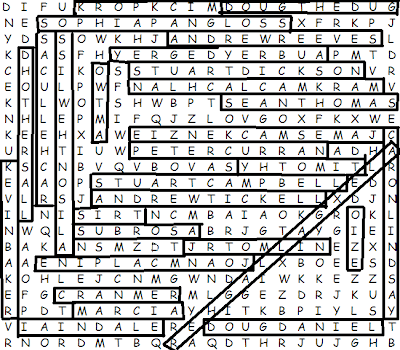 And these are the 29 names you were looking for - all of them people who have left comments on this blog over the last five-and-a-half years...

Andrew Tickell (pro-independence blogger, legal expert, intellectual colossus, and winner of the prestigious 'Guy With The Biggest Vocabulary' prize for sixteen out of the last seventeen years)

Alex Gallagher (Labour councillor for North Coast and Cumbraes ward, who as an anonymous Nat-bashing blogger liked to style himself as 'Braveheart'. Seriously.)

Stuart Dickson (author of the Independence blog, voice of reason at PB for many, many years, and Sweden's best-known SNP member!)

AM2 (The man. The myth. The legend. Alex Salmond's most stunning personal endorsement in 2011. Named 'AM Two' in the puzzle to avoid a giveaway.)

Kevin Baker (He's the thin star-spangled line that is all that stands between America and communism, and he couldn't do it without his loaded firearms. Don't forget, folks - the mysterious fact that Scotland has a much lower murder rate than gun-lovin' America can be easily explained away by non-specific "cultural factors".)

Mick Pork (SNP supporter who knows more about the phone hacking scandal than the rest of us have had hot dinners, and who has been proudly banned from PB on no fewer than 90 separate occasions - that's 86 more than me!)

Alison Thewliss (SNP councillor for the Calton ward in Glasgow, and formerly a prolific blogger as Bellgrove Belle)

Sophia Pangloss (quite simply the finest blogger in the Scots language that I know of, and another fellow Eurovision fanatic)

Rachel Lucas (Very witty and very right-wing American blogger, who has the distinction of being the only advocate of Tea Party-style politics that has ever made me laugh with them rather than at them. On a less positive note, she was also the person who indirectly introduced me to the dubious delights of the Kevin Baker Fan Club.)

Ezio (Florentine nobleman and all-round megastar. What has happened to Ezio? Someone send out a search party!)
Email ThisBlogThis!Share to TwitterShare to FacebookShare to Pinterest
Posted by James Kelly at 8:00 PM