The Tories told voters that this election was "one last chance" to stop an independence referendum. That chance has now gone.

Just thought I'd take a screenshot of this tweet, in case it mysteriously disappears at some point.  Here we have the Tories telling voters last Wednesday that the election was "one last chance" to stop a second independence referendum.  Not a "once in a generation chance" or even a "once in a lifetime chance", but the "last" chance.  If that chance wasn't taken, the matter was settled forever.  And we know that when politicians say things like that, they're always talking absolutely literally and can be held to their word. 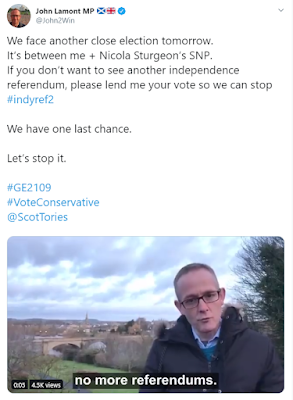 Crikey, what a moment.  No more chances for the Tories - ever.  Time to move on, and hold that referendum.

Email ThisBlogThis!Share to TwitterShare to FacebookShare to Pinterest
Posted by James Kelly at 7:02 PM