Like many of you, I was at the pro-independence rally in George Square yesterday (you can find a few photos at the bottom of this post), and I thought one of the best speeches was by Scottish Green co-leader Patrick Harvie - it was passionate and inspiring, and I don't think there was much in it that any SNP supporter could take issue with.  Harvie's contribution to the Yes campaign in 2014 shouldn't be underestimated either.  But I think it's fair comment to say that the planned Green intervention in the forthcoming general election - the sheer number of constituencies they're standing in and also some of the particular constituencies they've selected - will not be helpful to the independence cause, and could well be extremely harmful.

Way back in 2004, I voted for Ralph Nader rather than John Kerry in the hotly-contested US presidential election that was ultimately won by George W Bush.  I did it because I couldn't bring myself to vote for a supporter of the death penalty.  But some people told me in no uncertain terms that I had taken leave of my senses by voting for a man who had acted as a spoiler four years earlier and handed Bush the presidency on a plate.  That criticism led me to reflect at quite a bit of length about the wisdom of no-hoper parties participating in first-past-the-post elections, where the risk is that they'll take votes away from larger parties on the same side of the political spectrum who stand a much better chance of winning.  And the conclusion I came to was that Nader's critics didn't have a leg to stand on, because hardly any of them actually supported reform of the electoral system.  It would have been entirely reasonable for them to say "hold your nose and help us win this time, so that we can change the voting system and make sure you never again have to choose the lesser of two evils".  But instead the message was effectively "vote for us because you've got no other choice, and to help us ensure that you never have any other choice in future elections".  It was an argument for permanent self-exclusion from the electoral process of certain political views - something which no democrat should ever be asked to accept.  The sole way the likes of Nader could ever hope to break out of that vicious circle was to stand for election and cause a 'problem' big enough to ensure that a larger party would feel the need to solve it by reforming the system.

But that is not the situation the Scottish Greens find themselves in here.  Three of the four tiers of political representatives in Scotland are already elected by proportional representation, so one option open to the Greens would be to concentrate their efforts on local, Holyrood and European elections, and just sit out first-past-the-post Westminster elections where they might cause harm.  They could do that safe in the knowledge that the party they'd effectively be standing aside to help is supportive of a change in the Westminster voting system anyway.  But if they really feel that they have to stand in a significant minority of Westminster constituencies to draw attention to the climate emergency, you'd think the logical thing to do would be to carefully select constituencies where they'd be least likely to cause damage to the pro-independence movement - in other words, seats that the SNP are either nailed on to win or nailed on to lose.  (The latter basically means any of the four Liberal Democrat seats.)  Instead, they seem to have deliberately chosen a number of marginal seats where votes taken away from the SNP by the Greens could easily swing the balance and help to elect a unionist MP.

Denise Findlay pointed out on Twitter yesterday that if the Greens are standing in Perth and North Perthshire specifically because of problems they have with Pete Wishart's track record, that means they must be targeting Wishart and trying to get him out.  But if they succeed in doing that, they'll be replacing him with a Tory, because only the SNP and the Tories are seriously in contention in that constituency.  How is that going to help tackle climate change, let alone help the pro-independence cause or the anti-Brexit cause?  It really does seem like a totally self-defeating act.

However, I'm not going to say what they're doing is illegitimate, because unlike the "2nd vote Green" shenanigans in Holyrood elections, there's no deception involved.  Everyone knows the score with first-past-the-post elections and the potential downsides of voting for fringe parties.  It'll be painfully obvious from the numbers on the day after the election whether the Greens have cost us pro-independence seats - and if they have, there'll be no hiding-place for them.

Meanwhile, Stuart Campbell is lambasting the Greens for much the same reasons I've outlined above, but as ever he has his own agenda in mind.  He contrasts the harm the Greens could do at this election with the supposed good his own Wings party will be doing at the 2021 Holyrood election, and asks his readers which of the two parties is functioning as 'friend' and which is functioning as 'enemy'.  Of course the correct answer is that they're both functioning as 'enemy' (if it really must be reduced to such juvenile terms) because they're both doing precisely the same thing - taking an action that will at best have a neutral effect, and at worst a harmful effect.

Mr Campbell yet again misleads his readers by claiming that the worst-case scenario for a Wings party "in any reasonable fact-based model" is the net loss of one pro-indy seat in the Scottish Parliament.  In truth, that model was not based on "reason" but on fantastical and wildly-optimistic assumptions.  But even on such a flawed model, the only realistic scenarios would see Wings either cost the pro-indy side one seat, or have no effect at all.  Which means Mr Campbell is currently minded to do exactly what he's demonising the Greens for.

As you may have seen, a commenter on the previous thread found an email address to which complaints about ITV's decision to exclude the SNP from its leaders' debate can be addressed:  viewerservices@itv.com

I'm quoted in this new article by Alasdair Soussi on the Al Jazeera website about the relevance of the coming election to the independence campaign.  The other person quoted is Professor James Mitchell of Edinburgh University, and it reminded me of a slightly stormy exchange I had with him immediately after the exit poll was released on election night in 2017.  I had just pointed out that by winning a majority of Scottish seats, the SNP had completed the "triple lock" mandate for holding an independence referendum in exactly the terms specified in their manifesto.  Professor Mitchell's retort was something like "this is completely nuts, there isn't going to be an independence referendum for a very long time", and implied that talking too much about a referendum that wasn't going to happen had caused the SNP's supposedly poor result in the first place.  Which I thought was deeply odd on three counts: a) the SNP had just won a landslide victory roughly on a par with Mrs Thatcher's Britain-wide result in 1987, b) any problems the SNP had faced were not caused by talking about the referendum too much, but by talking about it too little and thus failing to motivate their own supporters to turn out, and c) why would anyone be surprised or annoyed that an independence supporter wasn't willing to be an accomplice to a self-fulfilling prophecy that would see the SNP betray a mandate that they had only just sought and won?

Professor Mitchell is still very much in the self-fulfilling prophecy business - arguing that the SNP's forefronting of independence in this campaign is unlikely to bring about an independence referendum, and may reduce the SNP's share of the vote.  From which I presume the logical conclusion we're meant to draw is that the way to achieve independence is never to campaign for it - or more probably that we should just replace independence with a more 'realistic' objective instead.  Those of us who believe in tailoring the strategy to the goal, rather than changing the goal to suit the strategy, are unlikely to be seduced by that counsel of despair. 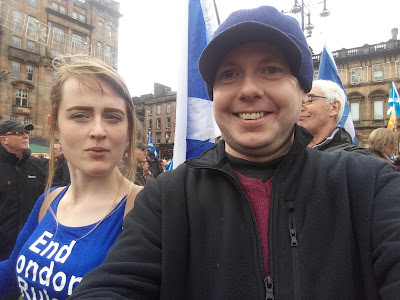 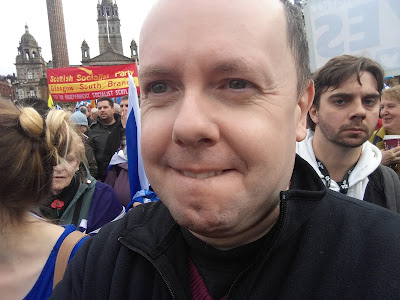 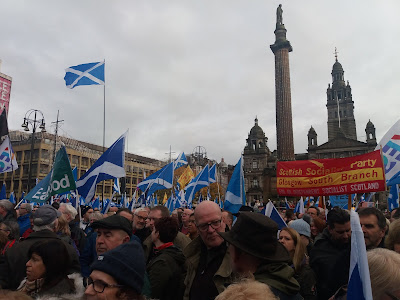 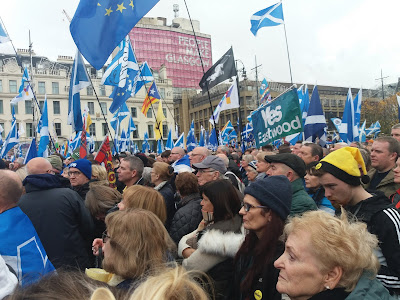 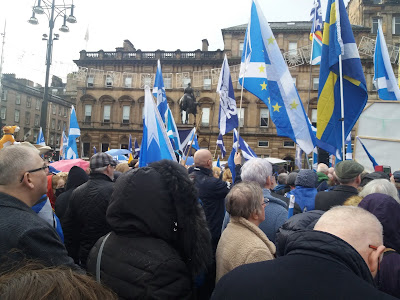 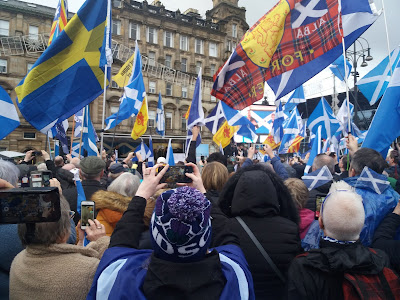 Email ThisBlogThis!Share to TwitterShare to FacebookShare to Pinterest
Posted by James Kelly at 6:56 AM